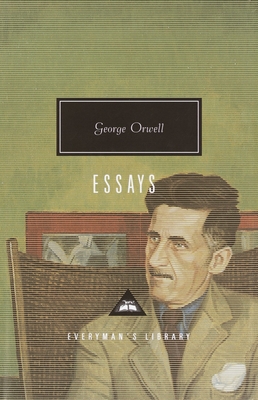 A generous and varied selection–the only hardcover edition available–of the literary and political writings of one of the greatest essayists of the twentieth century.

Although best known as the author of Animal Farm and Nineteen Eighty-four, George Orwell left an even more lastingly significant achievement in his voluminous essays, which dealt with all the great social, political, and literary questions of the day and exemplified an incisive prose style that is still universally admired. Included among the more than 240 essays in this volume are Orwell’s famous discussion of pacifism, “My Country Right or Left”; his scathingly complicated views on the dirty work of imperialism in “Shooting an Elephant”; and his very firm opinion on how to make “A Nice Cup of Tea.”

In his essays, Orwell elevated political writing to the level of art, and his motivating ideas–his desire for social justice, his belief in universal freedom and equality, and his concern for truth in language–are as enduringly relevant now, a hundred years after his birth, as ever.

GEORGE ORWELL (1903-1950) served with the Imperial Police in Burma, fought with the Republicans during the Spanish Civil War, and was a member of the Home Guard and a writer for the BBC during World War II. He is the author of many works of non-fiction and fiction.

“Orwell is the most influential political writer of the twentieth century…He gives us a gritty, personal example of how to engage as a writer in politics.” –New York Review of Books

“[Orwell] evolved, in his seemingly offhand way, the clearest and most compelling English prose style this century…But of course he was more than just a great writer. We need him today because [of] his passion for the truth.” –The Sunday Times (London)

“Had Orwell lived to a full term, he might well have gone on to become the greatest modern literary critic in the language. But he lived more than long enough to make writing about politics a branch of the humanities, setting a standard of civilized response to the intractably complex texture of life.” –The New Yorker

“The real reason we read Orwell is because his own fault-line, his fundamental schism, his hybridity, left him exceptionally sensitive to the fissure–which is everywhere apparent–between what ought to be the case and what actually is the case. He says the unsayable.” –Financial Times

“Orwell was the conscience of his generation.” –V. S. Pritchett