The Anatomy of Genres: How Story Forms Explain the Way the World Works (Paperback) 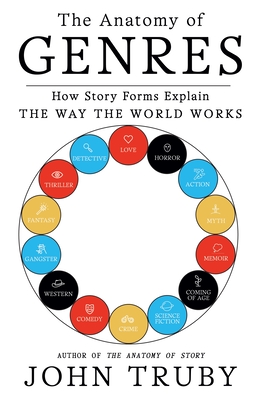 The Anatomy of Genres: How Story Forms Explain the Way the World Works (Paperback)

A guide to understanding the major genres of the story world by the legendary writing teacher and author of The Anatomy of Story, John Truby.

Most people think genres are simply categories on Netflix or Amazon that provide a helpful guide to making entertainment choices. Most people are wrong. Genre stories aren’t just a small subset of the films, video games, TV shows, and books that people consume. They are the all-stars of the entertainment world, comprising the vast majority of popular stories worldwide. That’s why businesses—movie studios, production companies, video game studios, and publishing houses—buy and sell them. Writers who want to succeed professionally must write the stories these businesses want to buy. Simply put, the storytelling game is won by mastering the structure of genres.

The Anatomy of Genres: How Story Forms Explain the Way the World Works is the legendary writing teacher John Truby’s step-by-step guide to understanding and using the basic building blocks of the story world. He details the three ironclad rules of successful genre writing, and analyzes more than a dozen major genres and the essential plot events, or “beats,” that define each of them. As he shows, the ability to combine these beats in the right way is what separates stories that sell from those that don’t. Truby also reveals how a single story can combine elements of different genres, and how the best writers use this technique to craft unforgettable stories that stand out from the crowd.

Just as Truby’s first book, The Anatomy of Story, changed the way writers develop stories, The Anatomy of Genres will enhance their quality and expand the impact they have on the world.

John Truby is the founder and director of Truby’s Writers Studio. Over the past thirty years, he has taught more than fifty thousand students worldwide, including novelists, screenwriters, and TV writers. Together, these writers have generated more than fifteen billion dollars at the box office.

Truby has an ongoing program where he works with students who are actively creating shows, movies, and novel series. He regularly applies his genre techniques in story consulting work with major studios including Disney, Sony Pictures, Fox, HBO, the BBC, Canal Plus, Globo, and AMC. He lives in Los Angeles with his wife, Leslie, and their two cats, Tink and Peanut.

“If you're ready to graduate from the boy-meets-girl league of screenwriting, meet John Truby...[His lessons draw] epiphanies that make you see the contours of your psyche as sharply as your script.” —LA Weekly