Three Minutes in Poland: Discovering a Lost World in a 1938 Family Film (Paperback) 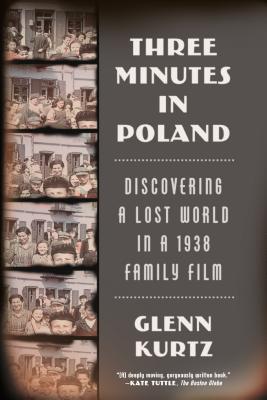 Three Minutes in Poland: Discovering a Lost World in a 1938 Family Film (Paperback)

Named one of the best books of 2014 by NPR, The New Yorker, and The Boston Globe

When Glenn Kurtz stumbles upon an old family film in his parents' closet in Florida, he has no inkling of its historical significance or of the impact it will have on his life. The film, shot long ago by his grandfather on a sightseeing trip to Europe, includes shaky footage of Paris and the Swiss Alps, with someone inevitably waving at the camera. Astonishingly, David Kurtz also captured on color 16mm film the only known moving images of the thriving, predominantly Jewish town of Nasielsk, Poland, shortly before the community's destruction. "Blissfully unaware of the catastrophe that lay just ahead," he just happened to visit his birthplace in 1938, a year before the Nazi occupation. Of the town's three thousand Jewish inhabitants, fewer than one hundred would survive.
Glenn Kurtz quickly recognizes the brief footage as a crucial link in a lost history. "The longer I spent with my grandfather's film," he writes, "the richer and more fragmentary its images became." Every image, every face, was a mystery that might be solved. Soon he is swept up in a remarkable journey to learn everything he can about these people. After restoring the film, which had shrunk and propelled across the United States; to Canada, England, Poland, and Israel; and into archives, basements, cemeteries, and even an irrigation ditch at an abandoned Luftwaffe airfield as he looks for shards of Nasielsk's Jewish history.
One day, Kurtz hears from a young woman who had watched the video on the Holocaust Museum's website. As the camera panned across the faces of children, she recognized her grandfather as a thirteen-year-old boy. Moszek Tuchendler of Nasielsk was now eighty-six-year-old Maurice Chandler of Florida, and when Kurtz meets him, the lost history of Nasielsk comes into view. Chandler's laser-sharp recollections create a bridge between two worlds, and he helps Kurtz eventually locate six more survivors, including a ninety-six-year-old woman who also appears in the film, standing next to the man she would later marry.
Painstakingly assembled from interviews, photographs, documents, and artifacts, Three Minutes in Poland tells the rich, harrowing, and surprisingly intertwined stories of these seven survivors and their Polish hometown. "I began to catch fleeting glimpses of the living town," Kurtz writes, "a cruelly narrow sample of its relationships, contradictions, scandals." Originally a travel souvenir, David Kurtz's home movie became the most important record of a vibrant town on the brink of extinction. From this brief film, Glenn Kurtz creates a poignant yet unsentimental exploration of memory, loss, and improbable survival--a monument to a lost world.

Glenn Kurtz is the author of Practicing: A Musician’s Return to Music and the host of Conversations on Practice, a series of public conversations about writing held at McNally Jackson Books in New York. He holds a PhD from Stanford University.

“Kurtz's quest to learn about the lost world depicted in his grandfather's home movie is at the heart of this deeply moving, gorgeously written book.” —Kate Tuttle, The Boston Globe

“[An] expansive, beautifully rendered micro-history. . . In the pages of Glenn Kurtz's marvelous book, the ghosts from those three minutes are breathtakingly brought to life.” —Louise Steinman, Los Angeles Times

“An impressive feat of historical research . . . In a genre so often preoccupied with the recitation of horrors, Three Minutes in Poland is the rare work that seems more about people than about ghosts.” —Sarah Kaplan, The Washington Post

“In this captivating book, Mr. Kurtz tries to reconstruct Jewish Nasielsk, knowing he will fail--not only because he arrives too late but because memory is by nature incomplete.” —Dara Horn, The Wall Street Journal

“Three Minutes in Poland--along with the remarkable four-year quest it documents--is an act of reverence, as well as a feat of archival reconstruction. Kurtz's patience, energy and appetite for detail seem boundless, and they gradually bring a community--a microcosm of Polish Jewry, with all its political and religious factions and class divisions--(almost) to life . . . The book accumulates elegiac power . . . Three Minutes in Poland describes with horrifying precision the ordeals that preceded the murders of most of Nasielsk's Jewish community. But equally compelling pages document how Chandler, with guile, luck and some Polish help, escapes the Warsaw ghetto, took a non-Jewish Polish identity and managed to survive.” —Julia Klein, The Chicago Tribune

“Kurtz weaves . . . a haunting web of contingency” —The New Yorker

“Kurtz's tenacious research and sensitive reporting make this book a gem.” —The Christian Science Monitor, The 10 best books of November

“A rare glimpse of a lost world.” —Moment magazine

“A pilgrimage of the highest order.” —Elaine Margolin, Jewish Journal

“Three Minutes in Poland begins as the story of an old family film rediscovered and veers into an important tale of Polish shtetls during World War II. It is intensely moving and brilliantly researched, and it reads like a thriller.” —Elie Wiesel, author of Night

“A masterpiece. With scrupulous intelligence and deep compassion, Glenn Kurtz tells this stupendous, terrifying, and ultimately consoling story in a way that fully honors the material. The reader grieves for what was lost, but is also alert to the miracle that anything was saved at all. Kurtz has done us all a great service in rescuing this tale from oblivion. Three Minutes In Poland is destined to be a classic.” —Teju Cole, author of Open City

“Glenn Kurtz's beautifully written book is many things at once: a family memoir, a page-turning mystery, a penetrating look at one of the darkest chapters in human history. Above all, it's a powerful testament to the singular worth of every life. That's the passion that inspired Kurtz through his years of research, and I can't think of a worthier one.” —Rebecca Goldstein, author of Mazel

“Glenn Kurtz leads the reader on an inspiring journey through the forgotten past in this meticulous work of historical reconstruction. I was amazed by the patient, forensic skill with which he followed the trail of a handful of images into a vibrant array of voices and visual memories. By helping his many interview subjects remember details of a world they themselves didn't know they still carried inside, Kurtz discovers life where there had seemed only to be loss.” —George Prochnik, author of The Impossible Exile

“With nothing more to go on than three scant minutes in a family film, Glenn Kurtz has meticulously pieced together a luminous, searing story of a place and its people. I read this beautiful book wishing for nothing less than to turn back the clock and change the course of history. Kurtz is a restrained and elegant writer, and Three Minutes in Poland is not only a magnificent literary achievement, but a human one.” —Dani Shapiro, author of Devotion