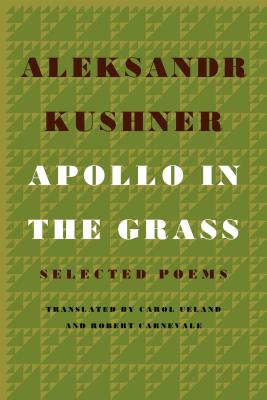 The more softly the word is pronounced
The more ardent, the more miraculous.
The less it dreams of becoming a song
That much nearer it draws to music.
-from "Apollo in the Grass"

For the Nobel laureate Joseph Brodsky, the poems of Aleksandr Kushner were essential: "Kushner is one of the best Russian lyric poets of the twentieth century, and his name is destined to rank with those close to the heart of everyone whose mother tongue is Russian."

Apollo in the Grass is the first collection in English translation of Kushner's post-Soviet poems, and also includes certain earlier ones that could not be published during the Soviet era.

Kushner speaks to us from a place where the mythic and the historic coexist with the everyday, where Odysseus is one of us, and the "stern voice" of history can transform any public square into a harrowing schoolroom. This layering of times and events is also embodied in Kushner's distinctive poetic voice. Echoes of earlier Russian poets and styles enrich and complicate an idiom that is utterly natural and contemporary.

Now, as in the Soviet era, Kushner's work is especially cherished for its exemplary stoic integrity. But these lyrical poems are also pieces of exquisite chamber music, songs where poetry dazzles but "greatness is . . . sooner scaled to the heart / Than to anything very enormous."

Aleksandr Kushner was born in Leningrad (St. Petersburg) in 1936, and his poetry resonates with its rich cultural heritage. He rose to prominence as part of the post-Stalin "thaw generation" that included Andrei Bitov, Joseph Brodsky and Evgenii Rein, and his work has reached new levels in both reputation and popularity since the break-up of the Soviet Union. He has won numerous awards, national and international, and his poems have been translated into over a dozen languages. Apollo in the Grass is the first volume in English translation of Kushner’s post-Soviet poems, and also includes certain earlier ones that could not be printed when they were written.