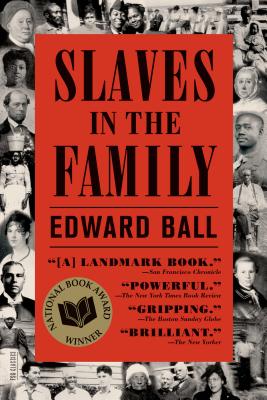 More than twenty years after this celebrated work of narrative nonfiction won the National Book Award and changed the American conversation about race, Slaves in the Family is reissued by FSG Classics, with a new preface by the author.

The Ball family hails from South Carolina—Charleston and thereabouts. Their plantations were among the oldest and longest-standing plantations in the South. Between 1698 and 1865, close to four thousand black people were born into slavery under the Balls or were bought by them.

In Slaves in the Family, Edward Ball recounts his efforts to track down and meet the descendants of his family's slaves. Part historical narrative, part oral history, part personal story of investigation and catharsis, Slaves in the Family is, in the words of Pat Conroy, "a work of breathtaking generosity and courage, a magnificent study of the complexity and strangeness and beauty of the word ‘family.'"

Edward Ball' is the author of several nonfiction books, including The Inventor and the Tycoon, about the birth of moving pictures in California, and Slaves in the Family, an account of his family’s history as slaveholders in South Carolina, which received the National Book Award for Nonfiction. He has taught at Yale University and has been awarded fellowships by the Radcliffe Institute at Harvard and the New York Public Library’s Cullman Center. He is also the recipient of a Public Scholar Award from the National Endowment for the Humanities.

“Everyone should read and learn from this luminous book...[Slaves in the Family] is not only honest in its scrupulous reporting but also personal narrative at its finest.” —San Francisco Chronicle

“Outside Faulkner, it will be hard to find a more poignant, powerful account of a white man struggling with his and his nation's past.” —The Atlanta Journal-Constitution

“Much more than bare history...It's the human encounters, and the live, breathing juxtaposition of past and present, that give [Edward Ball's] book its vibrancy and importance.” —Detroit Free Press

“A masterpiece . . . It is a work about slaves in the family. But it is also a large omnium-gatherum of enchanting fireside anecdotes, secrets teased out of reluctant fragments from the remote past, the real lives of blacks and whites whose stories had been lost in the disintegrating churn of time until Edward Ball's patient reconstructions.” —The Raleigh News & Observer

“[An] unblinking history not only of [Edward Ball's] ancestors but also of the people they held as slaves . . . It reminds us of our common humanity and of the ties that still bind us, no matter what the wounds of the past.” —The Philadelphia Inquirer