The Burial at Thebes: A Version of Sophocles' Antigone (Paperback) 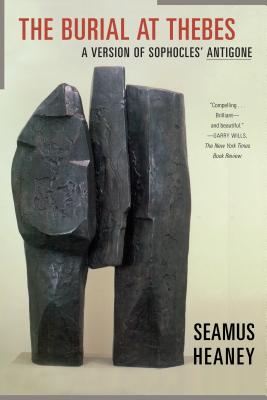 The Burial at Thebes: A Version of Sophocles' Antigone (Paperback)

By Seamus Heaney (Translated by), Sophocles

In this outstanding new translation, commissioned by Ireland's renowned Abbey Theatre to commemorate its centenary, Seamus Heaney exposes the darkness and the humanity in Sophocles' masterpiece, and inks it with his own modern and masterly touch.

Sophocles' play, first staged in the fifth century B.C., stands as a timely exploration of the conflict between those who affirm the individual's human rights and those who must protect the state's security. During the War of the Seven Against Thebes, Antigone, the daughter of Oedipus, learns that her brothers have killed each other, having been forced onto opposing sides of the battle. When Creon, king of Thebes, grants burial of one but not the "treacherous" other, Antigone defies his order, believing it her duty to bury all of her close kin. Enraged, Creon condemns her to death, and his soldiers wall her up in a tomb. While Creon eventually agrees to Antigone's release, it is too late: She takes her own life, initiating a tragic repetition of events in her family's history.

Seamus Heaney (1939-2013) received the Nobel Prize in Literature in 1995. His poems, plays, translations, and essays include Opened Ground, Electric Light, Beowulf, The Spirit Level, District and Circle, and Finders Keepers. Robert Lowell praised Heaney as the "most important Irish poet since Yeats."

Sophocles (496-406 BC) was one of the three great tragic playwrights of ancient Greece; he wrote 123 plays during a career of 60 years and was still writing at the age of 90. Only seven tragedies survive, of which the most famous is Oedipus Rex.
“Heaney has created something imperishable and great that is stainless--stainless, because its force as poetry makes it untouchable by the claw of literalism: it lives singly, as an English language poem.” —James Wood, The Guardian on Seamus Heaney's translation of Beowulf