The Bus on Thursday: A Novel (Paperback) 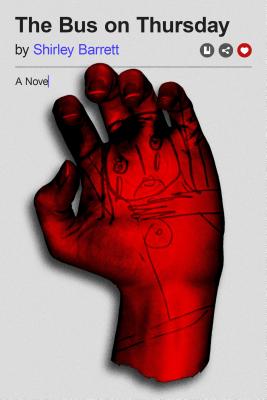 The Bus on Thursday: A Novel (Paperback)

"A horror novel about a breast cancer survivor told in the voice of your funniest but most anxious friend, The Bus on Thursday is an appealing mix of genres that is both fluffy and deeply affecting at the same time." —Maris Kreizman, Vulture

Bridget Jones meets The Exorcist in this wickedly funny, dark novel about one woman’s post-cancer retreat to a remote Australian town and the horrors awaiting her

It wasn’t just the bad breakup that turned Eleanor Mellett’s life upside down. It was the cancer. And all the demons that came with it.

One day she felt a bit of a bump when she was scratching her armpit at work. The next thing she knew, her breast was being dissected and removed by an inappropriately attractive doctor, and she was suddenly deluged with cupcakes, judgy support groups, and her mum knitting sweaters.

Luckily, Eleanor discovers Talbingo, a remote little town looking for a primary-school teacher. Their Miss Barker up and vanished in the night, despite being the most caring teacher ever, according to everyone. Unfortunately, Talbingo is a bit creepy. It’s not just the communion-wine-guzzling friar prone to mad rants about how cancer is caused by demons. Or the unstable, overly sensitive kids, always going on about Miss Barker and her amazing sticker system. It’s living alone in a remote cabin, with no cell or Internet service, wondering why there are so many locks on the front door and who is knocking on it late at night.

Shirley Barrett is an award-winning filmmaker and writer. She is the author of Rush Oh! and has written and directed three feature films and worked extensively as a director in television. Barrett was born in Melbourne and lives in Sydney, Australia.

A BookRiot Best Horror Book of 2018
A Vulture Editor's Pick

"A horror novel about a breast cancer survivor told in the voice of your funniest but most anxious friend, The Bus on Thursday is an appealing mix of genres that is both fluffy and deeply affecting at the same time." —Maris Kreizman, Vulture

"Barrett’s novel abounds with a steadily advancing dread, even as it's tempered by bursts of bleak humor. The result is a subtly unnerving novel with a sinister climax, and some imagery that's hard to forget." —Tobias Carroll, Vol. 1 Brooklyn

"A romp through literary horror, packed with the stunning images that one might expect from a writer who is also a director. But it also gives life to the crushing reality of a cancer patient?—?the anger, the grief, the crazy-making self-blame. The Bus on Thursday elegantly rides along the edges of these issues." —Joseph Scapellato, Electric Literature

"A horror novel about a breast cancer survivor told in the voice of your funniest but most anxious friend, The Bus on Thursday is an appealing mix of genres that is both fluffy and deeply affecting at the same time." —Vulture

"Your heart will go out to the eccentric, self-destructive Eleanor, whose sharply witty narration is a superb companion ot the weird world of Talbingo." —People

"The Bus on Thursday takes the 19th century literary conceit of a woman going mad in the face of repressive social expectations and updates it with brio for the 21st century." —Claire Allfree, Metro UK

"Narrated by a cybercentury Wife of Bath, this bawdy tale suspends both our disbelief and our scruples." — Kirkus

"With her snarky wit and old-school horror style, Barrett has mastered the art of the small-town gothic — perfect for readers who like their horror to straddle the nebulous border between the real and the otherworldly. Hilarious, bizarre, and absolutely terrifying, The Bus on Thursday reads like the Lovecraftian love child of Shirley Jackson and Stephen King!" —Powells.com

"The Bus on Thursday is a delirious, exhilarating ride that you can't predict and you won't forget. Like Rosemary's Baby recast with Bridget Jones, it will make you laugh and make you gasp. What more could you possibly want?" —Adam Sternbergh, author of The Blinds

"I don't know that I've read a book before that made me laugh out loud while remaining totally unnerved, but The Bus on Thursday does just that. It's a novel overrun with a rapidly metastasizing host of unreliable outbursts, odd characters and suspicious events. I'd willingly bear witness to any world through sociopathic Eleanor's eyes." —Jac Jemc, author of The Grip of It

"Bursting with raucous energy, while anchored in seriousness, The Bus on Thursday is an intoxicating horror-humor romp.” —Jeff VanderMeer, author of Borne and The Southern Reach Trilogy

“Shirley Barrett has crafted a quirky, one-of-a-kind, wild ride of a novel with demons, kangaroos, a missing schoolteacher, a remote town where things are strangely off-kilter, and a wonderfully bizarre cast of characters. The Bus on Thursday is a darkly funny and deeply unsettling novel you’ll devour in one sitting.” —Jennifer McMahon, author of The Winter People