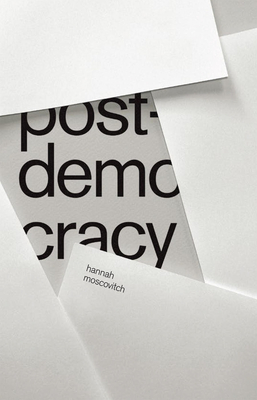 Welcome to the world of the one per cent, the corporate elite, the C-suite, the kingmakers. A world managed by payoffs, press releases, NDAs, and company policies. What happens to morality in this world when its people have limitless power?

When a CEO and his highest executives are on an international business trip to secure a major deal, a sex scandal between employees is unearthed on the news. As the pressure to complete the deal mounts, more damaging secrets come to the surface, endangering the CEO's company, family, and legacy.

In this searing look at upper-class privilege, Post-Democracy asks, what does it take to confront corruption?

Hannah Moscovitch is an acclaimed Canadian playwright, TV writer, and librettist whose work has been widely produced in Canada and around the world. Recent stage work includes Sexual Misconduct of the Middle Classes and Old Stock: A Refugee Love Story (co-created with Christian Barry and Ben Caplan). Hannah has been the recipient of numerous awards, including the Trillium Book Award, the Nova Scotia Masterworks Arts Award, the Scotsman Fringe First and the Herald Angel Awards at the Edinburgh Festival Fringe, and the prestigious Windham-Campbell Prize administered by Yale University. She has been nominated for the international Susan Smith Blackburn Prize, the Drama Desk Award, Canada's Siminovitch Prize in Theatre, and the Governor General's Literary Award. She is a playwright-in-residence at Tarragon Theatre in Toronto. She lives in Halifax.