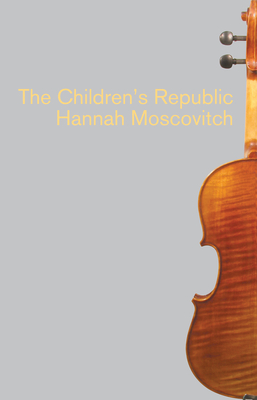 Confined within the walls of the Warsaw ghetto, Dr. Janusz Korczak struggles to protect the children at his orphanage from the horrors of the Second World War. There is not enough food or pairs of eyes to keep watch over them. Between a trouble-making thief, an abandoned girl, a malnourished boy, and a violin prodigy, Janusz has his hands full, but together they fight for beauty and hope in the world crumbling in around them.

Based on the WWII advocacy work of Dr. Janusz Korczak, The Children's Republic is a reminder of the hope that can still be found in a world devoid of freedom and the necessities of life.

Hannah Moscovitch is an internationally acclaimed playwright, TV writer, and librettist. She has been honoured with numerous accolades, including multiple Dora Mavor Moore Awards and Toronto Theatre Critics Awards, the Fringe First and Herald Angels Awards at the Edinburgh Fringe, the Trillium Book Award, the Nova Scotia Masterworks Arts Award, and the prestigious Windham-Campbell Prize administered by Yale. She has also been nominated for multiple Drama Desk Awards, the international Susan Smith Blackburn Prize, and twice for the Siminovitch Prize. Old Stock: A Refugee Love Story, her music-theatre hybrid (co-created with Christian Barry and Ben Caplan), continues to tour internationally. Hannah's newest play, Sexual Misconduct of the Middle Classes, premiered in Toronto in 2020. She splits her time between Halifax and Toronto.