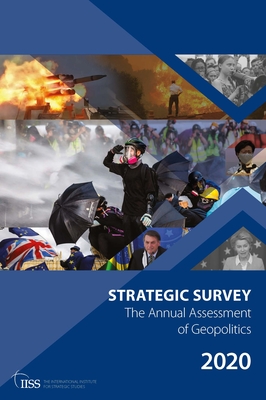 By The International Institute for Strategi (Editor)

The worst pandemic in a century tested governments, strained societies and frayed
international ties during the year to mid-2020. But there was much more to this period
than COVID-19. Climate change - another severe global challenge - grew more critical. US
President Donald Trump was impeached, the United Kingdom left the European Union, and
Iranian Quds Force commander Qasem Soleimani was killed.

Strategic Survey 2020 provides a comprehensive overview of major developments in every
region of the world, and in-depth analysis of key geopolitical and geo-economic issues:

War The US-Taliban agreement to end the United States' longest war; the persistence of
other complex armed con□flicts.

Power China's growing in□fluence, especially in Europe and the South Paci□fic; Turkey's force
projection in the Middle East and beyond; the EU's quest for strategic autonomy; the
new geopolitics of the Red Sea; the implications of Ethiopia's giant dam for relations
between Nile states; the increasing use of economic sanctions as a tool of statecraft.

Rules The decline of multilateralism; prospects for arms control; key gaps in international
law; Central Asia's connectivity; changes in the status of Jammu and Kashmir; dual
legitimacy in Venezuela.

Strategic Survey 2020 is the indispensable guide to the events, actors and forces that de□ ned
an exceptionally complex year. It highlights the geopolitical issues that will shape the
international agenda in 2021.