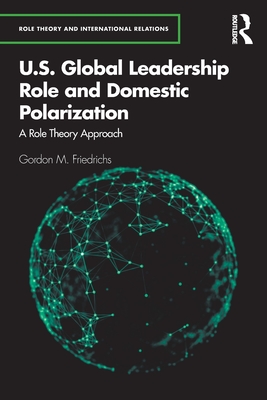 In this book Gordon Friedrichs offers a pioneering insight into the implications of domestic polarization for U.S. foreign policymaking and the exercise of America's international leadership role.

Through a mixed-method design and a rich dataset consisting of polarization data, congressional debates and letters, as well as co-sponsorship coalitions, Friedrichs applies role theory to analyze three polarization effects for U.S. leadership role-taking: a sorting effect, a partisan warfare, and an institutional corrosion effect. These effects are deployed in two comparative case studies: The Iran nuclear crisis as well as the negotiations of the Trans-Pacific Partnership Agreement. Friedrichs effectively exposes the drivers of polarization and how this extreme divergence has translated into partisan warfare as well as institutional corrosion, affecting direction and performance of the U.S. global leadership role.

Through advancing role theory beyond other studies and developing the concept of "diagonal contestation" as a mechanism that allows us to locate polarization within a "two-level role game" between agent and structure, U.S. Global Leadership Role and Domestic Polarization is a rich resource for scholars of international relations, foreign policy analysis, American government and polarization.

Gordon Friedrichs is a Postdoctoral Researcher at the Heidelberg Center for American Studies (Heidelberg University). His research deals predominately with U.S. foreign policy, domestic polarization and populism, and international relations theory, as well as Asia and the Asia-Pacific region.