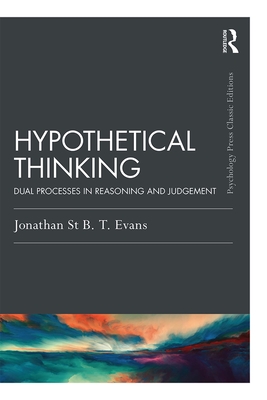 By Jonathan St B. T. Evans

Hypothetical thought involves the imagination of possibilities and the exploration of their consequences by a process of mental simulation. In this Classic Edition, Jonathan St B. T. Evans presents his pioneering hypothetical thinking theory; an integrated theoretical account of a wide range of psychological studies on hypothesis testing, reasoning, judgement and decision making.

Hypothetical thinking theory is built on three key principles and implemented in a version of Evans' well-known heuristic-analytic theory of reasoning. The central claim of this book is that this theory can provide an integrated account of apparently diverse phenomena including confirmation bias in hypothesis testing, acceptance of fallacies in deductive reasoning, belief biases in reasoning and judgement, biases of statistical judgement and numerous characteristic findings in the study of decision making.

Featuring a reflective and insightful new introduction to the book, this Classic Edition discusses contemporary theory on cognitive biases, human rationality and dual-process theories of higher cognition. It will be of great interest to researchers, post graduates as well as advanced undergraduate students.

Jonathan St B. T. Evans is Emeritus Professor of Cognitive Psychology at the University of Plymouth and founding and former editor of the international journal Thinking & Reasoning. He has published numerous experimental studies of thinking, reasoning, judgement and decision making, as well as several other books on these topics. He has investigated a number of cognitive biases and explored their implications for human rationality in earlier writing. He is probably best known for his development of dual-processing accounts of thinking and reasoning, a form of which provides the theoretical framing for the current book.