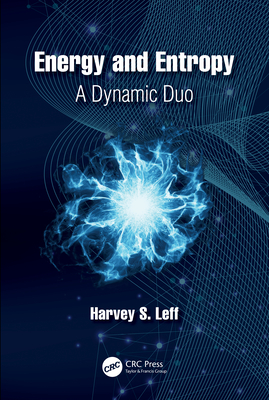 Energy is typically regarded as understandable, despite its multiple forms of storage and transfer. Entropy, however, is an enigma, in part because of the common view that it represents disorder. That view is flawed and hides entropy's connection with energy. In fact, macroscopic matter stores internal energy, and that matter's entropy is determined by how the energy is stored. Energy and entropy are intimately linked.

Energy and Entropy: A Dynamic Duo illuminates connections between energy and entropy for students, teachers, and researchers. Conceptual understanding is emphasised where possible through examples, analogies, figures, and key points.

Qualitative demonstration that entropy is linked to spatial and temporal energy spreading, with equilibrium corresponding to the most equitable distribution of energy, which corresponds to maximum entropy Analysis of energy and entropy of matter and photons, with examples ranging from rubber bands, cryogenic cooling, and incandescent lamps to Hawking radiation of black holes Unique coverage of numerical entropy, the 3rd law of thermodynamics, entropic force, dimensionless entropy, free energy, and fluctuations, from Maxwell's demon to Brownian ratchets, plus attempts to violate the second law of thermodynamics
Harvey S. Leff is Professor Emeritus of Physics at California State Polytechnic University in Pomona, California and Visiting Scholar at Reed College in Portland, Oregon. He has published widely in thermal physics, writing primarily for physics and chemistry teachers and students. With Andrew Rex, Leff co-edited Maxwell's Demon 2: Entropy, Classical and Quantum Information, Computing. He served as President of the American Association of Physics Teachers, and is a Fellow of the American Physical Society and the American Association of Physics Teachers, and a Consulting Editor for the American Journal of Physics. When not doing physics, Leff plays drums in two bands, The Leff Trio and Jazz Up, and he is the former drummer in The Out-Laws of Physics.