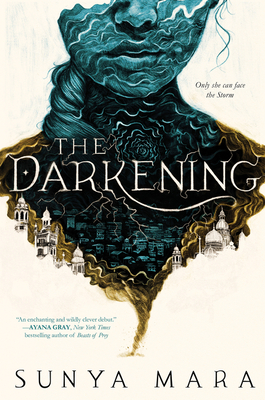 This is book number 1 in the The Darkening Duology series.

In this thrilling and epic YA fantasy debut, the only hope for a city trapped in the eye of a cursed storm lies with the daughter of failed revolutionaries and a prince terrified of his throne.

Vesper Vale is the daughter of revolutionaries. Failed revolutionaries. When her mother was caught by the queen’s soldiers, they gave her a choice: death by the hangman’s axe, or death by the Storm that surrounds the city and curses anyone it touches. She chose the Storm. And when the queen’s soldiers—led by a paranoid prince—catch up to Vesper’s father after twelve years on the run, Vesper will do whatever it takes to save him from sharing that fate.

Even arm herself with her father’s book of dangerous experimental magic.

Even infiltrate the prince’s elite squad of soldier-sorcerers.

Even cheat her way into his cold heart.

But when Vesper learns that there’s more to the story of her mother’s death, she’ll have to make a choice if she wants to save her city: trust the devious prince with her family’s secrets, or follow her mother’s footsteps into the Storm.

Sunya Mara grew up in six different cities across five different states and now calls Los Angeles home. She studied film and business at the University of Southern California and went on to write and illustrate at Kobe Bryant’s Granity Studios. When not telling stories, she spends her time haunting old movie theaters and staring at museum walls. Visit her online at sunyamara.com.

“An enchanting and wildly clever debut, Mara's The Darkening delivers on every promise. From its storm-tossed world, to its lyrical prose, to its propulsive, electrifying plot, readers will find themselves utterly ensnared by this book--it is a true masterclass in young adult fantasy.”  — Ayana Gray, New York Times-bestselling author of Beasts of Prey

“A thrilling, fast-paced adventure by an exciting new voice. Mara has crafted a brutal, richly-woven world balanced by the most lush and beautiful prose. The Darkening is a wild and thrilling ride, with twists and turns that will have you on the edge of your seat and an ending that'll have you begging for the sequel.”
— Adalyn Grace, New York Times bestselling author of All the Stars and Teeth

“A world that will ensnare you from the first page. The Darkening is at once a grand epic and an intimate adventure, following a brave band of heroes fighting their innermost curses.” — Chloe Gong, New York Times bestselling author of These Violent Delights

“The Darkening is a thrilling adventure that will draw readers in like the enchanted storm threatening Vesper’s world.” — Emily Thiede, author of This Vicious Grace

“Excellent world-building and beautiful prose . . . This strongly imaginative debut may appeal to fans of Sabaa Tahir’s An Ember in the Ashes.” — Bulletin of the Center for Children’s Books