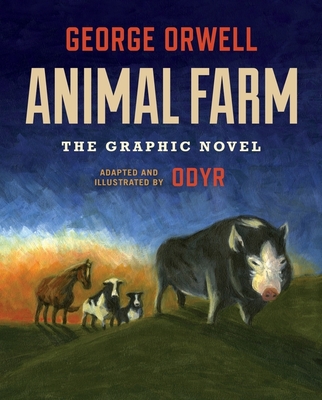 In 1945, George Orwell, called “the conscience of his generation,” created an enduring, devastating story of new tyranny replacing old, and power corrupting even the noblest of causes. Today it is all too clear that Orwell’s masterpiece is still fiercely relevant wherever cults of personality thrive, truths are twisted by those in power, and freedom is under attack. In this fully authorized edition, the artist Odyr translates the world and message of Animal Farm into a gorgeously imagined graphic novel.

Old Major, Napoleon, Squealer, Snowball, Boxer, and all the creatures of Animal Farm come to life in this newly envisaged classic. From his individual brushstrokes to the freedom of his page design, Odyr’s adaptation seamlessly moves between satire and fable and will appeal to all ages, just as Orwell intended.

GEORGE ORWELL (1903–1950) was born in India and served with the Imperial Police in Burma before joining the Republican Army in the Spanish Civil War. Orwell was the author of six novels, including 1984 and Animal Farm, as well as numerous essays and nonfiction works.

"Brazilian graphic novelist Odyr's 'fully authorized' adaptation (in accordance with The Estate of Sonia Brownell Orwell) of Orwell’s 1945 classic is affecting example...alchemizing Orwell’s period writing into a timeless, immediately terrifying warning about the dangers of abusive power."--Booklist   "[Odyr's] rich brushstrokes do much to enhance the experience of Orwell’s brand of satire."--New York Journal of Books —