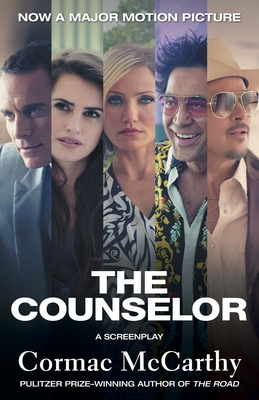 
Email or call for price
From the bestselling, Pulitzer Prize–winning author of The Road—in this screenplay of the major motion picture, the Counselor makes a risky entrée into the drug trade, on the eve of becoming a married man, and gambles that the consequences won’t catch up to him.

Along the gritty terrain of the Texas–Mexico border, a respected and recently engaged lawyer throws his stakes into a cocaine trade worth millions. His hope is that it will be a one-time deal and that, afterward, he can settle into life with his beloved fiancée. But instead, the Counselor finds himself mired in a brutal and dangerous game—one that threatens to destroy everything and everyone he loves. Deft, shocking, and unforgettable, McCarthy is at his finest in this gripping tale about risk, consequence, and the treacherous balance between the two.

Look for Cormac McCarthy's new novel, The Passenger.
The novels of the American writer, Cormac McCarthy, have received a number of literary awards, including the Pulitzer Prize, the National Book Award, and the National Book Critics Circle Award. His works adapted to film include All the Pretty Horses, The Road, and No Country for Old Men—the latter film receiving four Academy Awards, including the award for Best Picture.
“McCarthy’s philosophic and erudite dialogue, vivid explosion, and intriguing characters give the story a unique vitality.” —Booklist

“Like the novelists he admires—Melville, Dostoyevsky, Faulkner—Cormac McCarthy has created an imaginative oeuvre greater and deeper than any single book. Such writers wrestle with the gods themselves.” —The Washington Post Book World

“McCarthy’s prose [is] the most laudable, his characters the most fully inhabited, his sense of place the most bloodworthy and thoroughly felt of any living writer’s.”—Esquire

“McCarthy is one of the most richly stylized writers in American letters.” —San Francisco Chronicle

“McCarthy justifies the very worth of fiction in the consummate breadth and dimension of his work.” —New York Post

“The genius of McCarthy’s work [is] in its bold, seamless melding of private revelation, cultural insight, and unabashed philosophizing.” —The Village Voice

“He is nothing less than our greatest living writer.” —Houston Chronicle