The Princes in the Tower (Paperback) 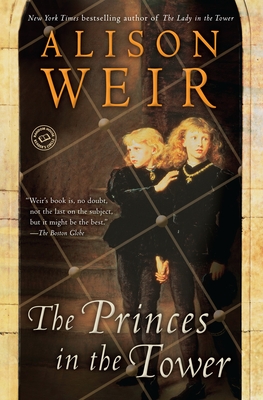 The Princes in the Tower (Paperback)

Despite five centuries of investigation by historians, the sinister deaths of the boy king Edward V and his younger brother Richard, Duke of York, remain two of the most fascinating murder mysteries in English history. Did Richard III really kill “the Princes in the Tower,” as is commonly believed, or was the murderer someone else entirely? Carefully examining every shred of contemporary evidence as well as dozens of modern accounts, Alison Weir reconstructs the entire chain of events leading to the double murder. We are witnesses to the rivalry, ambition, intrigue, and struggle for power that culminated in the imprisonment of the princes and the hushed-up murders that secured Richard’s claim to the throne as Richard III. A masterpiece of historical research and a riveting story of conspiracy and deception, The Princes in the Tower at last provides a solution to this age-old puzzle.

Alison Weir is the New York Times bestselling author of Eleanor of Aquitaine, Mary, Queen of Scots and the Murder of Lord Darnley, and several other historical biographies. She lives in Surrey with her husband and two children.
“Weir’s book is, no doubt, not the last on the subject, but it might be the best.”—The Boston Globe

“[Alison] Weir takes us on this delicious mystery with a fearsome vengeance. The result is a fascinating and completely credible account.”—Milwaukee Journal

“Did Richard III do in his nephews or didn’t he? How much of the evil-uncle legend was later Tudor propaganda and how much was true? . . . This is exciting reading.”—The Denver Post

“Good mysteries never die, they just improve with age. . . . Weir has assembled an impressive case for the prosecution in The Princes in the Tower.”—Orlando Sentinel