He Died with His Eyes Open: A Novel (Paperback) 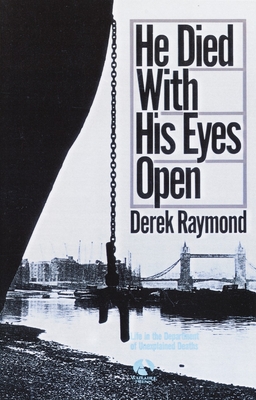 By Derek Raymond
$15.00
Email or call for price

“A unique crime writer whose fictional world was brutal, realistic and harrowing in the extreme.”—Guardian

In the three police procedurals that comprise the Factory Series, Derek Raymond has created a narrator who threatens to become a cult figure while preserving his anonymity. A loner and cynic, undervalued and underpaid, our hero is a nameless detective sergeant in the Department of Unexplained Deaths, a catch-all unit that investigates low-life crimes and is shunned by the blokes in the Serious Crimes Division of the Metropolitan Police.

But our narrator, working out of the Factory, named by the villains because it has a bad reputation for doing suspects over in the interrogation rooms, is fired by a real feeling for justice. He believes that an alcoholic, found obscenely battered to death in a seedy, down-and-out part of London, deserves as much official attention as, say, a dead politician. This “nobody” becomes a somebody—a kindred spirit who left behind a strange legacy. Our cop becomes obsessed by the case. But even he could not have imagined how vicious, evil, and perversely attractive his opponent will turn out to be.