Semi-Famous: A True Story of Near Celebrity (Hardcover) 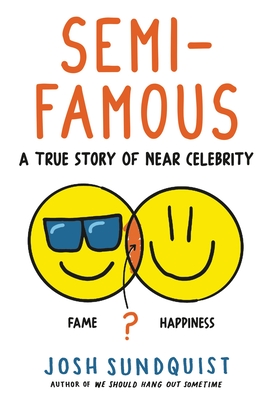 Semi-Famous: A True Story of Near Celebrity (Hardcover)


Usually Ships in 1-5 Days
Social media star and comedian Josh Sundquist takes readers on his hilarious journey to the fringes of viral stardom to discover if it’s possible to be both very famous and very happy.

As a semi-famous internet creator, Josh Sundquist knows what it's like to chase fame, but he also knows that more fame usually means more stress. So he set out on a pseudo-scientific investigation to find out if there is any way for fame and happiness to overlap.

He attempts to define the word “fame”—hint: it's harder than you'd think. He turns back time to identify the first facially-recognizable celebrity (you might know his former BFF Brutus). He digs into the numbers to debunk urban legends associated with stardom (ever heard of the 27 Club?). He talks to other semi-famous people (from K-pop sensations to former child stars) and asks them: Is this fame thing making you happy? If not, why are you doing it? If so, what's your secret? All while recounting funny stories about his own cringy fame-seeking (like his many attempts, and failures, to get onto MTV).

Packed with playful diagrams, fascinating insights from celebrities, and embarrassing truths from Josh’s experience with semi-fame, this is a must-read for anyone who has ever dreamed of becoming famous…or at least going viral on TikTok.
Josh Sundquist is a Paralympic ski racer, cancer survivor, popular YouTube vlogger, motivational speaker, and Halloween enthusiast. He is the author of We Should Hang Out Sometime, Love and First Sight and the bestselling Just Don't Fall. As a motivational speaker, Josh speaks to schools, conventions, and corporations across the world. He invites you to visit him at joshsundquist.com or follow him at @JoshSundquist.
"A cleverly funny memoir-slash-exposé….this is a fun and thoughtful work suitable for ­every young person living in our tech-driven world."—SLJ

"Cleverly humorous and extremely timely reading for those who seek renown."—Kirkus

* "Insightful and humorous… Sundquist's own awkward pursuit of fame is sometimes laugh-out-loud funny, and he offers wise and down-to-earth advice for those who come in already convinced that fame alone is a worthy goal. Highly recommended."—Booklist, starred review