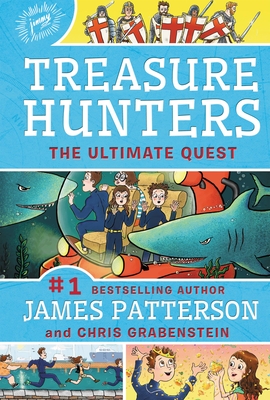 This is book number 8 in the Treasure Hunters series.

Dodge missiles, map undersea caves, outrun secret agents, and uncover the ultimate treasure? That’s a day in the life of the Kidds!

The Kidd family is on an exciting new mission: use the augmented reality gear their parents created to uncover long-lost treasure. But then their ship, The Lost, explodes in a ball of fire! Now Bick, Beck, Tommy, and Storm are stranded on a raft in the Mediterranean Sea, and their parents have been kidnapped by maniacal treasure hunters. It’s up to the Kidd siblings to follow clues around the globe to uncover an ancient treasure and save their parents . . . before they lose everything!
James Patterson is the world's bestselling author. The creator of Max Einstein and Middle School, he founded JIMMY Patterson to publish books that young readers will love. He lives in Florida with his family.

"This series promises it all: ruthless pirates, CIA spies, terrorists, stolen works of art and priceless treasure. More important, it delivers. A high-seas adventure that will entice even the most confirmed of landlubbers."—Kirkus Reviews

"A frenetic sense of excitement and adventure permeates this nautical escapade.... There's little time to breathe as the Kidds pinball from one spot of trouble to the next, making for a fun and fast-paced ride." —Publishers Weekly

"Short chapters, copious illustrations, and a rollicking, nonstop plot.... The fiercely loyal Kidds and a healthy dose of humor...make this fun-filled adventure series stand out.... It's hard to imagine the adventure-loving reader who wouldn't be hooked by this series."—Kirkus Reviews