Many Ways to Say I Love You: Wisdom for Parents and Children from Mister Rogers (Hardcover) 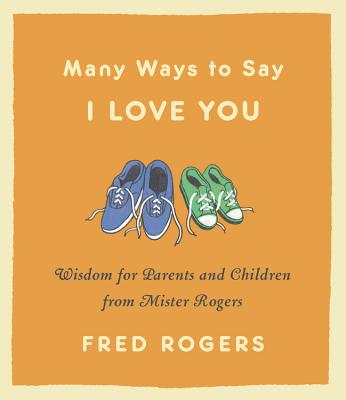 Many Ways to Say I Love You: Wisdom for Parents and Children from Mister Rogers (Hardcover)


Usually Ships in 1-5 Days
Inspirational words on parenting from the beloved PBS series Mister Rogers' Neighborhood, for new parents and those whose children are grown.

Fred Rogers has long been a wonderful resource for parents, offering their children entertainment and education through his enduring television show. Now his special brand of good cheer and wisdom are brought together especially for parents in this newest book based on never-before-published works.

Many Ways to Say I Love You is a treasury of segments from speeches and observations from his years of working with parents and children, as well as other materials from books, songs, TV commentary, and more. Using stories from his own life, Mister Rogers discusses the importance of children and the role of parents.
Known as "America's Favorite Neighbor," Fred Rogers dedicated his life to serving children through public television as creator, composer, and host of Mister Rogers' Neighborhood. He studied at the University of Pittsburgh Graduate School of Child Development and was ordained a Presbyterian minister, with the unique charge of working with children and families through television. Fred Rogers' relentless commitment to all that is best in people led to an astonishing array of honors, from induction into the Television Hall of Fame to the Presidential Medal of Freedom. Fred Rogers passed away in February 2003.

Mister Rogers' Neighborhood first debuted in 1968 on PBS and for over forty years has defined television at its finest.