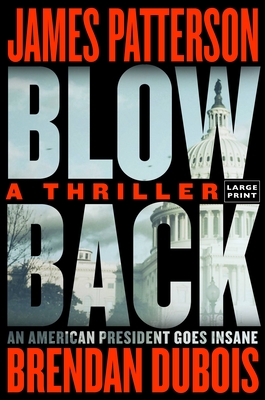 
Usually Ships in 1-5 Days
A brilliant American president is also a psychopath. He has his finger on the red button. And he’s about to start a world war with our most dangerous enemy. Put your finger on the order button. Push it to read James Patterson’s best and scariest novel yet.

“Pure Patterson… Blowback asks us to imagine what would happen if a narcissistic psychopath were elected to the White House [and] to experience the terror of the world hanging in the balance at a moment when only a handful of determined patriots can save us.” –Ron Charles, Washington Post

US President Keegan Barrett has swept into office on his success as Director of the CIA. Six months into his first term, he devises a clandestine power grab with deadly consequences.

Barrett personally orders CIA agents Liam Grey and Noa Himel to execute his plan, but their loyalties are divided. The CIA serves at the pleasure of the president, yet they’ve sworn to support and defend the Constitution of the United States against all enemies, foreign and domestic.

When the threat comes directly from the Oval Office, that’s where the blowback begins.
James Patterson is the world’s bestselling author. The creator of Alex Cross, he has produced more enduring fictional heroes than any other novelist alive. He lives in Florida with his family.

Brendan DuBois is the award-winning author of twenty-two novels and more than one hundred seventy short stories, garnering him three Shamus Awards from the Private Eye Writers of America. He is also a Jeopardy! game show champion.