The Only Black Girls in Town (Paperback) 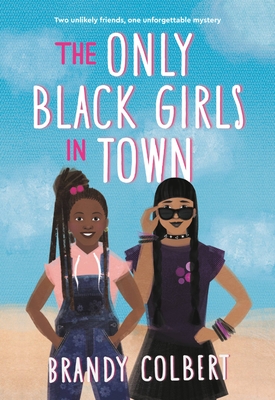 The Only Black Girls in Town (Paperback)


On Our Shelves Now
From award-winning YA author Brandy Colbert comes a debut middle-grade novel about the only two Black girls in town who discover a collection of hidden journals revealing shocking secrets of the past.

Beach-loving surfer Alberta has been the only Black girl in town for years. Alberta's best friend, Laramie, is the closest thing she has to a sister, but there are some things even Laramie can't understand. When the bed and breakfast across the street finds new owners, Alberta is ecstatic to learn the family is black—and they have a 12-year-old daughter just like her.

Alberta is positive she and the new girl, Edie, will be fast friends. But while Alberta loves being a California girl, Edie misses her native Brooklyn and finds it hard to adapt to small-town living.

When the girls discover a box of old journals in Edie's attic, they team up to figure out exactly who's behind them and why they got left behind. Soon they discover shocking and painful secrets of the past and learn that nothing is quite what it seems.
Brandy Colbert is the critically acclaimed author of the novels The Voting Booth, The Revolution of Birdie Randolph, Pointe, Finding Yvonne, and Stonewall Award winner Little & Lion. Born and raised in Springfield, Missouri, she now lives and writes in Los Angeles.

"The Only Black Girls in Town is a tender, humorous, and suspenseful story about navigating the turbulent waters of middle school friendship. Alberta and Edie prove that Blackness is not a monolith and remind us that if you keep looking, there's always more to see and learn about the people and places we love. Colbert's middle grade debut is an unputdownable tale. Readers will want to hang out with Alberta and Edie long after the story ends."—Renée Watson, author of Some Places More Than Others

*"Colbert employs a compulsively readable style to convey the sometimes difficult experience of young friendship, and the power and peril of claiming one's identity out loud."—Publishers Weekly, starred review

*"A remarkable middle-grade debut from YA powerhouse Colbert...a sweet story featuring children of color trying to find their place in a society that tells them they do not fit. Strongly recommended."—Booklist, starred review

*"A nuanced novel that skillfully depicts the ways friendships can be shaped by common experience and racial proximity."—School Library Journal, starred review

*Equal parts mystery, coming-of-age narrative and coastal California travelogue, The Only Black Girls in Town is an affectionate tribute to friends, both new and old, and the ways they enrich our lives.—Bookpage, starred review