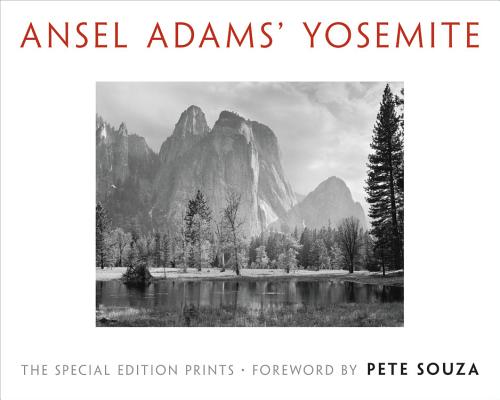 
Usually Ships in 1-5 Days
America's greatest photographer on his greatest subject--featuring the Yosemite Special Edition Prints, a collectible collection of photographs selected by Ansel Adams during his lifetime, yet never before published in book form.
The photographs of Ansel Adams are among America's finest artistic treasures, and form the basis of his tremendous legacy of environmental activism.
In the late 1950s, Adams selected eight photographs of Yosemite National Park to offer exclusively to park visitors as affordable souvenirs. He hoped that these images might inspire tourists to become activists by transmitting to them the same awe and respect for nature that Yosemite had instilled in him. Over the following decades, Adams added to this collection to create a stunning view of Yosemite in all its majesty.
These photographs, the Yosemite Special Edition Prints, form the core of this essential volume. Adams' luminous images of Yosemite's unique rock formations, waterfalls, meadows, trees, and nature details are among the most distinctive of his career. Today, with America's public lands increasingly under threat, his creative vision remains as relevant and convincing as ever.
Introduced by bestselling photographer Pete Souza, with an essay by Adams' darkroom assistant Alan Ross, Ansel Adams' Yosemite is a powerful continuation of Adams' artistic and environmental legacies, and a compelling statement during a precarious time for the American earth.
Ansel Adams (1902-1984) was the most honored American photographer of the twentieth century. Through the exhibition and publication of his work, his writings, and his leadership in the Sierra Club, Adams was also a prescient and highly effective voice in the fight to preserve America's remaining wilderness.  Pete Souza was the Chief Official White House Photographer for President Obama and the Director of the White House Photo Office. His books include the New York Times bestsellers Obama: An Intimate Portrait, Shade, and The Rise of Barack Obama. Alan Ross is an internationally acclaimed artist, master printer, and photographic educator, whose knowledge of Ansel Adams' approach and technique is unparalleled. From 1974 to 1979, he worked side-by-side with Adams as his photographic assistant. In 1975, Adams personally appointed Ross to be the exclusive printer of the Yosemite Special Edition negatives.
"Iconic and still breathtaking... Adams remains extravagantly popular."—The New York Times, January 2019

"Gorgeous... [These] vistas reveal Adams' ability to capture the wildness in nature and the book tells of his environmental activism."—Detroit Free Press

Adams' photographs "call attention to the passage of time and changing nature of the landscape, especially in the face of global warming... Adams' photographs spread his belief in the transformative power of national parks to a wide audience. The pioneer defined the genre and kickstarted environmental activism through art."—Fortune