Pink Floyd All the Songs: The Story Behind Every Track (Hardcover) 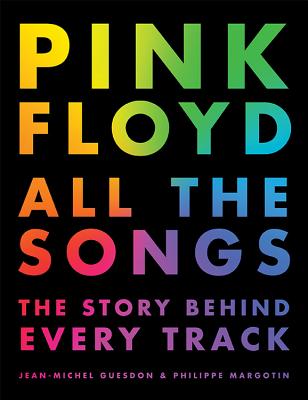 Pink Floyd All the Songs: The Story Behind Every Track (Hardcover)


Usually Ships in 1-5 Days
The newest addition to the best-selling All the Songs series details the unique recording history of Pink Floyd, one of the world's most commercially successful and influential rock bands.

Since 1965, Pink Floyd been recording sonically experimental and philosophical music, selling more than 250 million records worldwide, including two of the best-selling albums of all time Dark Side of the Moon and The Wall. While much is known about this iconic group, few books provide a comprehensive history of their time in the studio. In Pink Floyd All the Songs, authors Margotin and Guesdon describe the origin of their nearly 200 released songs, details from the recording studio, what instruments were used, and behind-the-scenes stories of the tensions that helped drive the band.

"A revealing guide for any curious about Pink Floyd's writing and recording some of the most vital and revolutionary music in the last 50 years."—Larson Sutton, Jambands.com

"A must have for Pink Floyd completists"—Dayton Daily News

"This chronological presentation of everything Pink Floyd will satisfy the most hard-core fans and captivate those unfamiliar with the band's massive musical output."
—Booklist

"Jean-Michel Guesdon and Philippe Margotin are rock encyclopedists. . . With their latest volume, they turn their sights to prog-rock legends Pink Floyd. It makes sense. Unless you're a super-fan, you're going to need some help deciphering Pink Floyd's five-decade discography."—Rock and Roll Book Club, The Current