The Land of Stories: Beyond the Kingdoms (Hardcover) 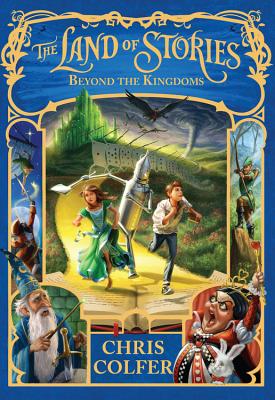 The Land of Stories: Beyond the Kingdoms (Hardcover)

This is book number 4 in the The Land of Stories series.

Fairy tales are just the beginning.

The Masked Man is on the loose in the Land of Stories, and it's up to Alex and Conner Bailey to stop him...except Alex has been thrown off the Fairy Council, and no one will believe they're in danger.

With only the help of the ragtag group of Goldilocks, Jack, Red Riding Hood, and Mother Goose and her gander, Lester, the Bailey twins discover the Masked Man's secret scheme: He possesses a powerful magic potion that turns every book it touches into a portal, and he is recruiting an army of literature's greatest villains!

So begins a race through the magical Land of Oz, the fantastical world of Neverland, the madness of Wonderland, and beyond. Can Alex and Conner catch up to the Masked Man, or will they be one step behind until it's too late?

Fairy tales and classic stories collide in the fourth adventure in the bestselling Land of Stories series as the twins travel beyond the kingdoms!
Chris Colfer is a #1 New York Times bestselling author and Golden Globe-winning actor. He was honored as a member of the TIME 100, Time magazine’s annual list of the one hundred most influential people in the world, and his books include Struck By Lightning: The Carson Phillips Journal, Stranger Than Fanfiction, the books in The Land of Stories series: The Wishing Spell, The Enchantress Returns, A Grimm Warning, Beyond the Kingdoms, An Author’s Odyssey, and Worlds Collide, the companion books A Treasury of Classic Fairy Tales, The Mother Goose Diaries, Queen Red Riding Hood’s Guide to Royalty, The Curvy Tree, Trollbella Throws a Party, and Goldilocks: Wanted Dead or Alive, and the books in the A Tale of Magic… series: A Tale of Magic…, A Tale of Witchcraft…, and A Tale of Sorcery…. He invites you to visit him online at thelandofstories.com or on Instagram and Twitter @chriscolfer.