Treasure Hunters: Peril at the Top of the World (Hardcover) 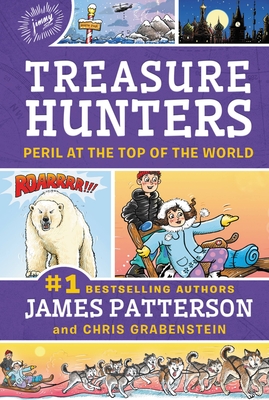 Treasure Hunters: Peril at the Top of the World (Hardcover)

This is book number 4 in the Treasure Hunters series.

Join the Kidds on their trek to exotic Russia and the dangerous Arctic as they outrun the bad guys in their search for stolen treasure.
After their adventures in China and Germany, the Kidd family is ready for some rest and relaxation. But when you're an ace treasure hunting team, there's always another adventure waiting around the corner! This time, the Kidds head to Russia where a set of priceless paintings by Leonardo da Vinci and Rembrandt has gone missing. Hot on the trail of the daring thieves, the Kidds race through the sinister streets of St. Petersburg and the wild Arctic tundra to track down the stolen treasure.
The action never stops with more chases, sneak attacks, spy missions, and doublecrossing than anyone can handle . . . except the Kidds!
James Patterson received the Literarian Award for Outstanding Service to the American Literary Community at the 2015 National Book Awards. He holds the Guinness World Record for the most #1 New York Times bestsellers, including Middle School and I Funny, and his books have sold more than 325 million copies worldwide. A tireless champion of the power of books and reading, Patterson has created a new children's book imprint, JIMMY Patterson, whose mission is simple: We want every kid who finishes a JIMMY Book to say, "PLEASE GIVE ME ANOTHER BOOK." He has donated more than one million books to students and soldiers and funds over four hundred Teacher Education Scholarships at twenty-four colleges and universities. He has also donated millions to independent bookstores and school libraries. Patterson will be investing his proceeds from the sales of JIMMY Patterson Books in pro-reading initiatives.


Praise for Treasure Hunters: Danger Down the Nile"Short chapters, copious illustrations, and a rollicking, nonstop plot....The fiercely loyal Kidds and a healthy dose of humor... make this fun-filled adventure series stand out.... It's hard to imagine the adventure-loving reader who wouldn't be hooked by this series."—Kirkus Reviews


"This new series promises it all: ruthless pirates, CIA spies, terrorists, stolen works of art and priceless treasure. More important, it delivers. A high-seas adventure that will entice even the most confirmed of landlubbers."—Kirkus Reviews

"A frenetic sense of excitement and adventure permeates this nautical escapade... There's little time to breath as the Kidds pinball from one spot of trouble to the next, making for a fun and fast-paced ride."—Publishers Weekly