The Fall of Dragons (The Traitor Son Cycle #5) (Paperback) 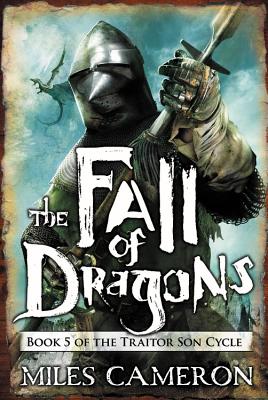 The Fall of Dragons (The Traitor Son Cycle #5) (Paperback)

This is book number 5 in the The Traitor Son Cycle series.

Miles Cameron is the master of intrigue and action-packed battles in this epic tale of magic and mercenaries, war, depravity, and politics, the final book of the Traitor Son Cycle.

In the climax of the Traitor Son Cycle, the allied armies of the Wild and the Kingdoms of men and women must face Ash for control of the gates to the hermetical universe, and for control of their own destinies. But exhaustion, treachery and time may all prove deadlier enemies.

In Alba, Queen Desiderata struggles to rebuild her kingdom wrecked by a year of civil war, even as the Autumn battles are fought in the west. In the Terra Antica, The Red Knight attempts to force his unwilling allies to finish the Necromancer instead of each other.

But as the last battle nears, The Red Knight makes a horrifying discovery. . .all of this fighting may have happened before.
Miles Cameron is a full-time writer who lives in Canada with his family. He also writes historical fiction under another name. The Traitor Son Cycle series is his fantasy debut.
"I cannot recommend the Traitor Son Cycle enough... amazing."—SF Signal on The Fell Sword

"The Red Knight is an excellent debut... [It] will only get better as the series progresses... You will be won by the intricate story and sophisticated world building."—Fantasy Book Critic on The Red Knight