The Plague of Swords (The Traitor Son Cycle #4) (Paperback) 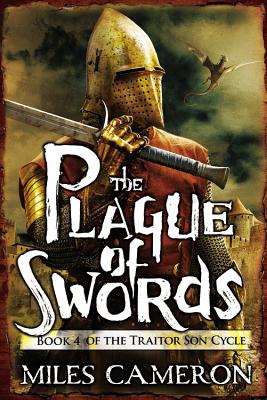 The Plague of Swords (The Traitor Son Cycle #4) (Paperback)

This is book number 4 in the The Traitor Son Cycle series.

With more at stake than ever before, The Red Knight faces an uncertain future and is forced to team up with old enemies to defeat a greater evil in the fourth book in the Traitor Son Cycle.

One enemy has fallen. But a greater one still remains. Now, it's war.

With one army defeated in a victory which will be remembered through the ages, now the Red Knight must fight again.

For every one of his allies, there is a corresponding enemy. Spread across different lands, and on sea, it will all come down to one last gamble. And to whether or not the Red Knight has guessed the foe's true intentions.

With each throw of the dice, everything could be lost.
Miles Cameron is a full-time writer who lives in Canada with his family. He also writes historical fiction under another name. The Traitor Son Cycle series is his fantasy debut.

"The Red Knight is an excellent debut... You will be won by the intricate story and sophisticated world building."—Fantasy Book Critic

"Will only get better as the series progresses...you will be won by the intricate story and sophisticated world building."—Fantasy Book Critic on The Red Knight

"A very solid continuation of the tale for readers who have been following the adventures of Gabriel in Cameron's sprawling alternate historical Europe... will entertain readers and get them excited for the next book."
—Publishers Weekly on The Plague of Swords