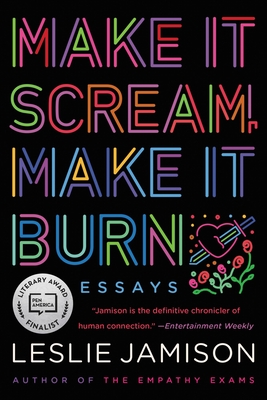 
Usually Ships in 1-5 Days
From the "astounding" (Entertainment Weekly), "spectacularly evocative" (The Atlantic), and "brilliant" (Los Angeles Times) author of the New York Times bestsellers The Recovering and The Empathy Exams comes a return to the essay form in this expansive book.

With the virtuosic synthesis of memoir, criticism, and journalism for which Leslie Jamison has been so widely acclaimed, the fourteen essays in Make It Scream, Make It Burn explore the oceanic depths of longing and the reverberations of obsession.

Among Jamison's subjects are 52 Blue, deemed "the loneliest whale in the world"; the eerie past-life memories of children; the devoted citizens of an online world called Second Life; the haunted landscape of the Sri Lankan Civil War; and an entire museum dedicated to the relics of broken relationships. Jamison follows these examinations to more personal reckonings -- with elusive men and ruptured romances, with marriage and maternity -- in essays about eloping in Las Vegas, becoming a stepmother, and giving birth.

Often compared to Joan Didion and Susan Sontag, and widely considered one of the defining voices of her generation, Jamison interrogates her own life with the same nuance and rigor she brings to her subjects. The result is a provocative reminder of the joy and sustenance that can be found in the unlikeliest of circumstances.

Finalist for the PEN/Diamonstein-Spielvogel Award for the Art of the Essay
One of the fall's most anticipated books: Time, Entertainment Weekly, O, Oprah Magazine, Boston Globe, Newsweek, Esquire, Seattle Times, Baltimore Sun, BuzzFeed, BookPage, The Millions, Marie Claire, Good Housekeeping, Minneapolis Star Tribune, Lit Hub, Women's Day, AV Club, Nylon, Bustle, Goop, Goodreads, Book Riot, Yahoo! Lifestyle, Pacific Standard, The Week, and Romper.
Leslie Jamison is the author of the New York Times bestsellers The Recovering and The Empathy Exams, and the novel The Gin Closet. She is a contributing writer for the New York Times Magazine, and her work has appeared in publications including the Atlantic, Harper's, the New York Times Book Review, the Oxford American, and the Virginia Quarterly Review. She directs the graduate nonfiction program at Columbia University and lives in Brooklyn with her family.

"Jamison has emerged as a definitive chronicler of human connection and the beauty of mundanity...With this brilliant new collection that rigorously interrogates the human condition, Leslie Jamisonaffirms why she's the essayist of the moment."—David Canfield, Entertainment Weekly

"Razor-sharp...Leslie
Jamison has been hailed as the newborn lovechild of Joan Didion and Susan
Sontag. Even for a writer without Jamison's generous helpings of talent and
success, it can't be an easy thing to live up to. And yet, she does, and then
some...The essays are reported, but also confessional, weaving the realities of
disparate others onto Jamison's own experiences to create something rich, human
and, at moments, so smart and revealing the reader finds herself gasping."—Samantha Shoech, San Francisco Chronicle

"Intelligent and vibrant...Make It Scream, Make It Burn tackles the all-too-human topic of yearning and its oft-corollary, obsession. Both gurgle beneath the writer's sonorous and captivating prose."—Janet Kinosian, Los Angeles Times

"Sharply analytic and deeply personal...Make It Scream, Make It Burn is a heady hybrid of journalism, memoir, and criticism...This is a writer who is incapable of being uninteresting."—Heller McAlpin, NPR

"A dazzling collection about the outer reaches of human connection...Acute in her
analysis and nourishing in her observations, Jamison is at the height of her
powers here as she investigates what we owe one another."—Adrienne Westenfeld, Esquire

"Lovely and evocative...Most of these essays are heavyweight boxers."—New York Times Book Review

"Leslie Jamison's astonishingly formidable, restless
intellect has gifted us two monumental works of nonfiction...Here, she turns her exacting
eye on subjects such as the loneliest whale in the world and a Croatian museum
filled with the effluvia of failed relationships."—O, The Oprah Magazine

"A pleasure to
read. We can see Jamison let go of her carefully wrought personal narrative and
open herself to the unknown."—Sheila McClear, Washington Post

"Illuminating and ruminative...Jamison is positively brilliant when penetrating a subject and unraveling its layers of meaning...Fans of the author's unique brand of perceptiveness will be delighted."—Publishers Weekly

"Provocative...compassionate, curious and humble...Jamison acknowledges that she has skin in the
game, and her wise, urgent writing is stronger for it."—Chris Hewitt, Minneapolis Star Tribune

"Like the glass
in a kaleidoscope, Jamison's fine-tuned attention seems capable of refracting
whatever subject it touches. When I finally looked up from the page it was with
a renewed sense of wonder."—Cornelia Channing, The Paris Review

"These perceptive essays demonstrate that the best-selling author of The Empathy Exams continues to explore the limits of human connections."—Elle

"A masterwork...Leslie Jamison has long been known as a force in American
writing for both her intellect and empathy...Jamison draws connections to her own life--a challenging
dance that can only be pulled off by the most masterful of writers."—Louis Cheslaw, Condé Nast Traveler

"As riveting as ever, Jamison's writing elicited within me many of the same responses I felt while reading her previous essay collection, The Empathy Exams: enlightenment, amusement, and of course, empathy itself."—Zakiya Harris, The Rumpus

"Jamison is one of my favorite working essayists...[In] Make It Scream, Make It Burn [she] dances between the personal, the critical, and the observational, showing her deftness when it comes to each form."—Jeva Lange, The Week

"Richly diverse . . . The pieces in Make It Scream, Make It Burn are all written with care and intricacy, drawing readers in and making us care . . . Jamison's observational skills, genuine empathy, and lack of sentimentality create an intelligent blending of journalism, scholarship, and memoir."—Pam Kingsbury, Library Journal

"Leslie Jamison is a master of blending memoir, criticism and journalism...[her] characteristic fusion of the intellectual and emotional is in full force here, cementing comparisons of her work to that of Joan Didion and Susan Sontag."—Christy Lynch, Bookpage

"Even as she documents the experiences of others--Sri Lankan soldiers, Second Life superusers, eminent writers and photographers--Jamison is keenly aware of how her personal experiences shape the way she reports their stories. It's this knowledge that propels the collection, along with her rejection of cynicism in favor of being open to new ideas and experiences, no matter how foreign they may seem."—Maris Kreizman, Pacific Standard

"To
fortify and enlarge the world through eloquence--apt descriptions of Jamison's
new collection...Another wonderful book from this gifted writer."—The Millions

"Lyrical...There is something distinctly empowering in...Jamison's
employment of the self--in [her] collapsing of the theoretical and the
experienced."—Katherine Lucky, Commonweal Magazine

"Jamison has emerged
as a giant in the world of creative nonfiction. She returns with a beautifully
compiled collection of essays reflecting on obsession and longing."—Entertainment Weekly

"Stunning...Essential...Make It Scream, Make It Burn expands on the efforts of The Empathy Exams...Here we see the territory Jamison's writing inhabits: self-questioning while at the same time empathetic, dubious and credible at once...What Jamison is after is a kind of radical honesty: the ongoing inquiry of a mind at work. That this is not a new issue, but infuses all her writing, is the whole idea...For Jamison, interaction comes with all sorts of risk, not least that in getting close to other people, we can't help but leave ourselves exposed. Still, what other choice do we have? To be human is to be vulnerable."—David L. Ulin, Four Columns

"Leslie Jamison is a writer of supreme eloquence and intelligence who deftly combines journalistic, critical and memoiristic approaches to produce essays that linger long in the memory."—LitHub

"Jamison interrogates a variety of fascinating subjects, including her own life, in her praiseworthy second essay collection... Make It Scream, Make It Burn confirms the praise heaped on 2014's The Empathy Exams for her uncanny ability to blend perceptive reportage with intensely personal essays in consistently fresh, dynamic prose."—Harvey Freedenberg, Shelf Awareness

"In her new essay
collection, Jamison allows herself to roam beyond the boundaries of one issue,
and instead latches her powerful, precise observations to a number of
unconventional topics."—Cristina Arreola, Bustle

"If you ever need to be reminded of the potential of the essay and why essay collections matter or if you just want to get excited about one, read Leslie Jamison...In Make It Scream, Make it Burn, three of the most poignant and personal essays come in the final section: one on Jamison's own marriage...A brilliant exploration of what it means to be a stepmother...and the last, an essay on giving birth that flips back and forth between Jamison's pregnancy and an eating disorder that marked her earlier experiences of her body."—Goop

"If you loved The Empathy Exams and The Recovering, you'll devour Leslie Jamison's new collection of essays about obsession and longing. From thoughts on Civil War photography to a museum dedicated to breakups, her insightful, thought-provoking writing shines brightly throughout."—Yahoo! Lifestyle