The Land of Stories: The Enchantress Returns (Hardcover) 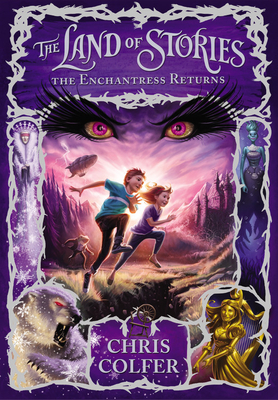 The Land of Stories: The Enchantress Returns (Hardcover)

This is book number 2 in the The Land of Stories series.

After decades of hiding, the evil Enchantress who cursed Sleeping Beauty is back with a vengeance.

Alex and Conner Bailey have not been back to the magical Land of Stories since their adventures in The Wishing Spell ended. But one night, they learn the famed Enchantress has kidnapped their mother! Against the will of their grandmother, the twins must find their own way into the Land of Stories to rescue their mother and save the fairy tale world from the greatest threat it's ever faced.
Chris Colfer is a #1 New York Times bestselling author and Golden Globe-winning actor. He was honored as a member of the TIME 100, Time magazine’s annual list of the one hundred most influential people in the world, and his books include Struck By Lightning: The Carson Phillips Journal, Stranger Than Fanfiction, the books in The Land of Stories series: The Wishing Spell, The Enchantress Returns, A Grimm Warning, Beyond the Kingdoms, An Author’s Odyssey, and Worlds Collide, the companion books A Treasury of Classic Fairy Tales, The Mother Goose Diaries, Queen Red Riding Hood’s Guide to Royalty, The Curvy Tree, Trollbella Throws a Party, and Goldilocks: Wanted Dead or Alive, and the books in the A Tale of Magic… series: A Tale of Magic…, A Tale of Witchcraft…, and A Tale of Sorcery…. He invites you to visit him online at thelandofstories.com or on Instagram and Twitter @chriscolfer.

Praise for the Land of Stories Series:"There is more in Colfer's magic kingdoms than Disney has dreamt of."—USA Today

"It will hit big with its combination of earnestness and playful poise."—The New York Times Book Review

"I thoroughly enjoyed the second book in the Land of Stories series as it was as descriptive, fast paced and entertaining as ever."—The Guardian