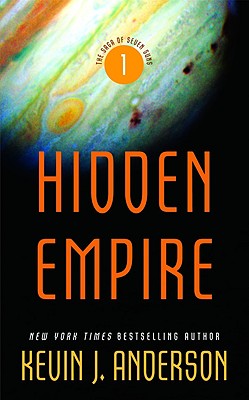 This is book number 1 in the The Saga of Seven Suns series.

In our galaxy's distant future, humans are one of three known intelligent races. Having had the ability to navigate star travel for only a few centuries, we are considered "the new kids on the block" in a long-established universe. The second intelligent race is the Ildirans, who are ruled by their Mage-Imperator; and the third race, the Klikiss, seems to have vanished and left behind a world full of artifacts and remarkable technology, which humans are now beginning to find and utilize.

One such piece of technology is a device that has the power to turn a gaseous and useless supergiant planet into a small sun, thereby creating a new solar system in which humans can live. But when the device is tried for the first time, it awakens the wrath of a previously unsuspected fourth race, the Hydrogues -- and a galaxy-spanning war that threatens all life begins.
Kevin J. Anderson has written forty-six national bestsellers and has over twenty million books in print worldwide in thirty languages. He has been nominated for the Nebula Award, the Bram Stoker Award, and the SFX Readers' Choice Award. Find out more about Kevin Anderson at www.wordfire.com.