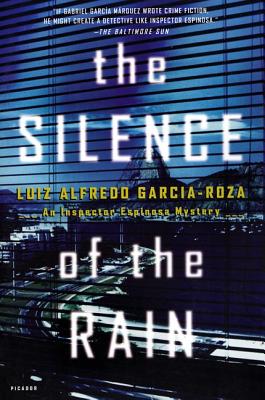 This is book number 1 in the Inspector Espinosa Mysteries series.

In a parking garage in the center of Rio de Janeiro, corporate executive Ricardo Carvalho is found dead in his car, a bullet in his head, his wallet and briefcase missing. Inspector Espinosa is called in to investigate the apparent robbery and murder, but the world-weary Espinosa knows that things are not always as they seem. Carvalho's recently acquired one-million-dollar life insurance policy and the subsequent disappearance of his secretary Rose complicate matters—as does Espinosa's attraction to Carvalho's beautiful widow, one of the suspects. And when two more people turn up dead, Espinosa must speed up his investigation before anyone else becomes a casualty.

Luiz Alfredo Garcia-Roza is a bestselling novelist who lives in Rio de Janeiro. His Inspector Espinosa mysteries—The Silence of the Rain, December Heat, Southwesterly Wind, A Window in Copacabana, Pursuit, and Blackout—have been translated into six languages and are available in paperback from Picador.

“Readers who like their thrillers to possess something beyond a fast-paced, tricky plot will find much to marvel over [here]...Breathes fresh air into the crime novel genre.” —Los Angeles Times

“Effortlessly conveys ideas and characters...[and] displays the mystery novel as a richly expressive medium for ideas... Garcia-Roza will find an eager audience in English.” —The Washington Post

“Garcia-Roza's Hitchcockian trick of knowing exactly how much to reveal to keep his audience off-balance keeps this melancholic debut simmering.” —Kirkus Reviews