Lords of the Horizons: A History of the Ottoman Empire (Paperback) 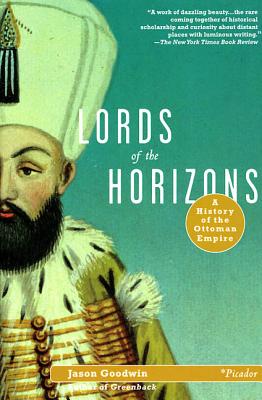 Lords of the Horizons: A History of the Ottoman Empire (Paperback)

"A work of dazzling beauty...the rare coming together of historical scholarship and curiosity about distant places with luminous writing." --The New York Times Book Review

Since the Turks first shattered the glory of the French crusaders in 1396, the Ottoman Empire has exerted a long, strong pull on Western minds. For six hundred years, the Empire swelled and declined. Islamic, martial, civilized, and tolerant, in three centuries it advanced from the dusty foothills of Anatolia to rule on the Danube and the Nile; at the Empire's height, Indian rajahs and the kings of France beseeched its aid. For the next three hundred years the Empire seemed ready to collapse, a prodigy of survival and decay. Early in the twentieth century it fell. In this dazzling evocation of its power, Jason Goodwin explores how the Ottomans rose and how, against all odds, they lingered on. In the process he unfolds a sequence of mysteries, triumphs, treasures, and terrors unknown to most American readers.

This was a place where pillows spoke and birds were fed in the snow; where time itself unfolded at a different rate and clocks were banned; where sounds were different, and even the hyacinths too strong to sniff. Dramatic and passionate, comic and gruesome, Lords of the Horizons is a history, a travel book, and a vision of a lost world all in one.

JASON GOODWIN is the Edgar Award–winning author of the Investigator Yashim series. The first five books—The Janissary Tree, The Snake Stone, The Bellini Card, An Evil Eye, and The Baklava Club—have been published to international acclaim, alongside Yashim Cooks Istanbul, a cookbook of Ottoman Turkish recipes inspired by the series. Goodwin studied Byzantine history at Cambridge and is the author of Lords of the Horizons: A History of the Ottoman Empire, among other award-winning nonfiction. He lives with his wife and children in England.

“A work of dazzling beauty...the rare coming together of historical scholarship and curiosity about distant places with luminous writing.” —The New York Times Book Review

“A meditation on a vanished world that hovers like an apparition over today's grim headlines.” —The New York Times Book Review

“Jason Goodwin's deftly written and beguiling history of the Ottoman Empire is particularly pertinent today, when the cauldron of ancient hatred once more boils over, but his prose would be welcome at any time.” —The Boston Globe

“May be read with pleasure and profit by everyone, not least the traveler headed east of Vienna and west of Baghdad.” —The Wall Street Journal