Xenophon's Cyrus the Great: The Arts of Leadership and War (Paperback) 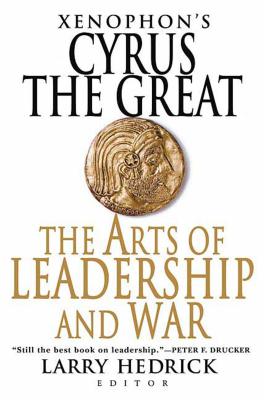 Xenophon's Cyrus the Great: The Arts of Leadership and War (Paperback)

Cyrus, a great Persian leader, was so widely and memorably respected that a hundred years later, Xenophon of Athens wrote this admiring book about the greatest leader of his era. Larry Hedrick's Introduction describes Cyrus and his times.

Among his many achievements, this great leader of wisdom and virtue founded and extended the Persian Empire; conquered Babylon; freed 40,000 Jews from captivity; wrote mankind's first human rights charter; and ruled over those he had conquered with respect and benevolence.

According to historian Will Durant, Cyrus the Great's military enemies knew that he was lenient, and they did not fight him with that desperate courage which men show when their only choice is "to kill or die." As a result the Iranians regarded him as "The Father," the Babylonians as "The Liberator," the Greeks as the "Law-Giver," and the Jews as the "Anointed of the Lord."

By freshening the voice, style and diction of Cyrus, Larry Hedrick has created a more contemporary Cyrus. A new generation of readers, including business executives and managers, military officers, and government officials, can now learn about and benefit from Cyrus the Great's extraordinary achievements, which exceeded all other leaders' throughout antiquity.

Xenophon was a soldier, mercenary and a contemporary and admirer of Socrates. He is known for his writings on the history of his own times, the sayings of Socrates, and the life of Greece.

LARRY HEDRICK is a former U.S. Air Force officer. He lives in Seattle, Washington. Xenophon's Cyrus the Great is his first book.