The White City: A Novel of Murder at the Chicago World's Fair (Paperback) 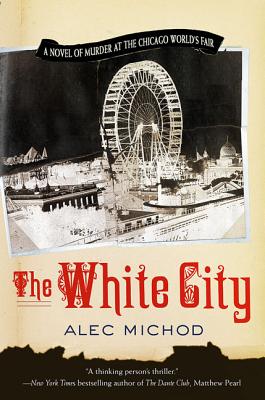 The White City: A Novel of Murder at the Chicago World's Fair (Paperback)

It is the year of our lord, 1893. The crackle of electricity's first sparks, the mechanical whine of Ferris's wheel, the tinkling of crystal from the majestic city atop the hill--the sounds of a new era pervade the air as the century's last World's Fair commences in Chicago.

But darkness lurks beneath the metropolis so austere it has been dubbed the White City. Strikes loom on the horizon, racism runs rampant, and a murderer unlike any America has ever seen before is on the loose, terrorizing the city. His crimes are so brutal, newspapers have christened him the Husker. Hiding behind the cloak of a city in chaos, he taunts his pursuers, littering the grounds of the fair with the corpses of children as he slips through the shadows.

Dr. Elizabeth Handley, the first forensic psychologist of her kind, has been called in to capture the killer, but when the son of prominent architect William Rockland goes missing, the case takes on an entirely new urgency. In this city of bombastic politics and cutthroat egos, everyone has his own agenda, but time is running out. As she races to save the boy, Dr. Handley fights to maintain her sanity as the line between captor and quarry blurs, and violence casts its spell.

From the depths of the seediest brothels to the pristine enclaves of the elite, The White City is a strange, beguiling first novel, a thriller that masterfully blends fact and fiction. An exhilarating voyeur's glimpse at Chicago in all its glory, it also probes the dark side that was never far from its core.

Alec Michod is a graduate of Columbia University's MFA writers program. His work has appeared in The New York Times, Chicago Tribune and the literary journal Conjunctions. The White City is his first novel.

“A macabre intelligence pervades this novel, as history and fiction by turns complement and taunt one another. The wide range of characters Michod vividly captures at their breaking points are not only confronting a serial killer blended into late nineteenth century Chicago, they are also challenging us to contemplate the fear and thrills we locate uniquely in violence. A thinking person's thriller. ” —Matthew Pearl, author of The New York Times Bestseller The Dante Club

“The White City is a spooky, atmospheric, first-rate historical thriller. Alec Michod is a bold new writer, who has based his story on America's first famous serial killer, and set it amidst all the turbulence and color of turn-of-the-century Chicago.” —Kevin Baker, author of The New York Times Notable Book Dreamland

“Alec Michod's The White City is an exuberant first novel fully engaged with the extravagant display of the Chicago Worlds Fair of 1893. Delightfully plotted as a thriller, any number of fumbling detectives ply their trade in the false landscape of the phantasmagoric city. But Michod is up to more than an entertainment. He unmasks the greed and deception that lies under the fantasy and fun, to expose the underside of the American Dream.” —Maureen Howard, author of The New York Times Notable Book Big As Life

“Find a blanket, pour a drink, settle beneath your lamp: Here is a stylish and irresistible novel that will ruin your sleep and follow you into the day. Something sinister is afoot in 1893 Chicago, and you won't get much done until peace is restored. But be warned, however, because in Alec Michod's dazzling The White City, the wind off Lake Michigan has a way of playing with the light.” —Peter Gadol, author of Light at Dusk and The Long Rain