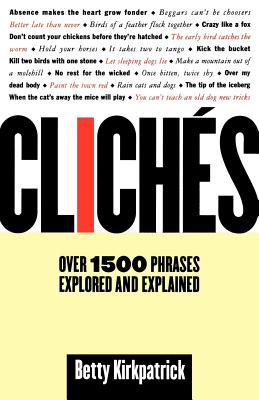 Betty Kirkpatrick has complied and exhaustive dictionary--a must for writers, crossword puzzle buffs, and anyone who is intrigued by language.

Bite the bullet is an idiom cliche meaning to steel oneself to accept something distressing. In origin it probably refers to the days before anesthesia, when soldiers wounded in battle were given a lead bullet to bite on to brace themselves against the pain of surgery.

Fly off the handle is an idiom cliche meaning to lose one's temper. Originally American, the expression has its origin in an ax or hammer, the handle of which becomes loosened and flies off after it has struck a blow.

Betty Kirkpatrick is a writer and lexicographer. Editor of both the Bloomsbury Thesaurus and Roget's Thesaurus, she was formerly editor of the Chambers Twentieth-Century Dictionary. She lives in Scotland.