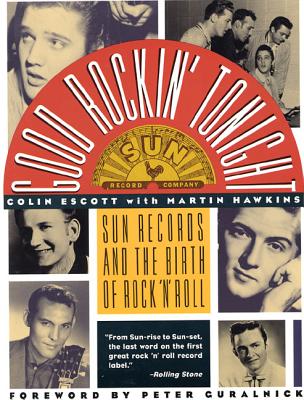 Memphis, Tennessee. The early 1950s. The Mississippi rolls by, and there's a train in the night. Down on Beale Street there's hard-edged blues, on the outskirts of town they're pickin' hillbilly boogie.

This is where rock 'n' roll was born-the record company that launched Elvis Presley, Jerry Lee Lewis, Johnny Cash, Roy Orbison, and Carl Perkins. The label that brought the world, "Blue Suede Shoes," "Whole Lotta Shakin' Goin' On," "Breathless," "I Walk the Line," "Mystery Train," "Baby, Let's Play House,' "Good Rockin' Tonight." Good Rockin Tonight is the history, in words and over 240 photographs, of Sam Phillips' legendary storefront studio, from the early days with primal blues artists like Howlin' Wolf and B.B. King to the long nights in the studio with Elvis and Jerry Lee. As colorful and energetic as the music itself, it's a one-of-a-kind book for anyone who wants to know where it all started.

Colin Escott has conducted twenty years of research on Sun Records as a catalog and reissue specialist. Escott lives in Toronto.

Martin Hawkins has conducted twenty years of research on Sun Records as a catalog and reissue specialist. He lives in London.

“Myriad dazzling vintage photos...and a load of fresh insight into some of the hottest sounds ever committed to tape...The authoritative work in one of the most important musical legacies-and the visionary who built it from scratch.” —Goldmine

“Tricked out with photos of Sun's stars and staff-which is to say, with faces that just plain take your eyes into custody-this book's as glorious a bit of Americana as blue sueded shoes.” —Booklist