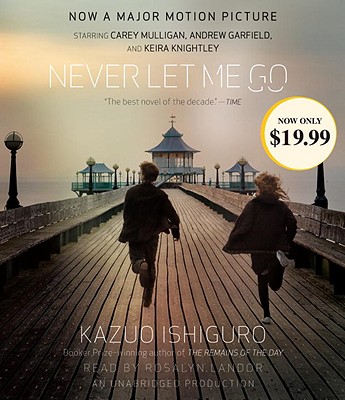 By Kazuo Ishiguro, Rosalyn Landor (Read by)
$19.99
Email or call for price

From the winner of the Nobel Prize in Literature and author of the Booker Prize-winning novel The Remains of the Day comes a devastating novel of innocence, knowledge, and loss.

As children Kathy, Ruth, and Tommy were students at Hailsham, an exclusive boarding school secluded in the English countryside. It was a place of mercurial cliques and mysterious rules where teachers were constantly reminding their charges of how special they were. Now, years later, Kathy is a young woman. Ruth and Tommy have reentered her life. And for the first time she is beginning to look back at their shared past and understand just what it is that makes them special--and how that gift will shape the rest of their time together. Suspenseful, moving, beautifully atmospheric, Never Let Me Go is modern classic.

Kazuo Ishiguro's books have won him wide renown and numerous honors. His work has been translated into more than 40 languages. Both The Remains of the Day and Never Let Me Go have sold more than 1 million copies, and both were adapted into highly acclaimed films. Ishiguro's other work includes Nocturnes, A Pale View of the Hills, and An Artist of the Floating World. Rosalyn Landor is an English-born television, theater, and multiple-award-winning audiobook narrator. Her television credits include Love in a Cold Climate, Rumpole of the Bailey, Sherlock Holmes, and Star Trek: The Next Generation. She has won numerous Audie awards and AudioFile magazine Earphones awards.

"A page turner and a heartbreaker, a tour de force of knotted tension and buried anguish.” —Time

“A Gothic tour de force. . . . A tight, deftly controlled story . . . . Just as accomplished [as The Remains of the Day] and, in a very different way, just as melancholy and alarming.” —The New York Times

"Elegaic, deceptively lovely. . . . As always, Ishiguro pulls you under." —Newsweek