Twilight of the Elites: America After Meritocracy (Hardcover) 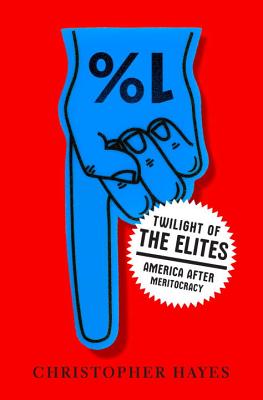 Twilight of the Elites: America After Meritocracy (Hardcover)

A powerful and original argument that traces the roots of our present crisis of authority to an unlikely source: the meritocracy.

Over the past decade, Americans watched in bafflement and rage as one institution after another –  from Wall Street to Congress, the Catholic Church to corporate America, even Major League Baseball – imploded under the weight of corruption and incompetence. In the wake of the Fail Decade, Americans have historically low levels of trust in their institutions; the social contract between ordinary citizens and elites lies in tatters.

How did we get here? With Twilight of the Elites, Christopher Hayes offers a radically novel answer. Since the 1960s, as the meritocracy elevated a more diverse group of men and women into power, they learned to embrace the accelerating inequality that had placed them near the very top. Their ascension heightened social distance and spawned a new American elite--one more prone to failure and corruption than any that came before it.

Mixing deft political analysis, timely social commentary, and deep historical understanding, Twilight of the Elites describes how the society we have come to inhabit – utterly forgiving at the top and relentlessly punitive at the bottom – produces leaders who are out of touch with the people they have been trusted to govern. Hayes argues that the public's failure to trust the federal government, corporate America, and the media has led to a crisis of authority that threatens to engulf not just our politics but our day-to-day lives.

Upending well-worn ideological and partisan categories, Hayes entirely reorients our perspective on our times. Twilight of the Elites is the defining work of social criticism for the post-bailout age.

Christopher Hayes is Editor at Large of"The Nation"and host of"Up w/ Chris Hayes"onMSNBC. From 2010 to 2011, he was a fellow at Harvard University sEdmond J Safra Foundation Center for Ethics. His essays, articles, and reviews have appeared in"The New York Times Magazine," "Time," "The American Prospect," "The New Republic," "The Washington Monthly," and"The Guardian. "Helives in Brooklyn with his wife Kate and daughter Ryan."


“Hayes, an editor-at-large of The Nation and host of the MSNBC talk show Up With Chris Hayes, has written a perceptive and searching analysis of the problems of meritocracy.” – Foreign Affairs

“[A] stunning polemic….Hayes' book is the rare tome that originates from a political home (the left) and yet actually challenges assumptions that undergird the dominant logic in both political parties. This is not mealy-mouthed centrism. It is a substantive critique of the underlying logic of both Barack Obama and Mitt Romney – the logic of meritocracy.” – Ta-Nehisi Coates, Baltimore Sun

“In a very good new book titled Twilight of the Elites: America After Meritocracy, Chris Hayes offers one of the most compelling assessments of how soaring inequality is changing American society.” – The Economist.com

“Let's just say that if you like politics and big ideas, you want to buy this book.  It's a lot more intellectually ambitious than your typical pundit book and offers a really great blend of writing chops and social theory synthesis.”
– Matthew Yglesias, Slate.com

“In his new book, The Twilight of the Elites: America After Meritocracy, Chris Hayes manages the impossible trifecta: the book is compellingly readable, impossibly erudite, and—most stunningly of all—correct.” – Aaron Swartz, Crookedtimber.org

“I was myself very impressed by the level of execution in this book.”
– Tyler Cowen, Marginalrevolution.com

“Hayes’s book makes for a great read….Twilight uses a wide variety of academic and journalistic work, balancing a deep, systemic critique of society with detailed and empathetic reporting about those most affected by elite failure.”
– Mike Konczal, Dissent

“Twilight of the Elites offers an elegant, original argument that will make both cynics and idealists reconsider their views of how, and whether, our society works. If Americans believe in anything, it’s our meritocracy. Hayes is brave to question it so forcefully.” – Commonweal

“A potent articulation of a society’s free-floating angst, Twilight of the Elites stakes its claim as the jeremiad by which these days will be remembered.”
– Washington Monthly.com

“I read Chris Hayes' Twilight of the Elites last month and will suggest that you read it too – it's an engaging read that addresses the question of whether a meritocratic elite can really stay meritocratic over extended periods of time.” – Daniel W. Drezner, Foreign Policy.com

“This was a book I found so stimulating and immersive that I cannot wait to be able to discuss it with a larger audience….Even if you think you are aware of the depth of the rot plaguing the highest levels of our society, you will likely earn a new level of outrage by reading this book.” – Alexis Goldstein, Livetotry.com

“Make[s] you think in new ways about why we tolerate such vast and growing income inequality….an extended meditation on why the great hope and change revolution of 2008 has so far left the inequitable status quo a little bit too intact.” – Salon.com

“Twilight of the Elites by Chris Hayes may change the way you look at the world….[It] almost single-handily undermines virtually every precept we’ve come to accept about life in the modern age.  It also may well turn out to be the seminal treatise for the so-called ‘FAIL’ generation, a term that loosely connotes everyone who graduated since the beginning of the 21st Century.” – Good Men Project.com

“Twilight of the Elites is a engaging, insightful book.  I finished it in less than 24 hours, and I encourage you to pick up a copy.” – Forbes.com

“A powerful critique of the meritocratic elite that has overseen one of the most disastrous periods of recent history.” – The American Conservative

“In his new book, Twilight of the Elites: America After Meritocracy, Hayes raises demanding questions about a nation that is both enamored with and troubled by its elites.” – Reason

“[L]ively and well-informed….Offering feasible proposals for change, this cogent social commentary urges us to reconstruct our institutions so we can once again trust them.” – Publishers Weekly (starred)

“This is the Next Big Thing that we have been waiting for.  Twilight of the Elites is the fully reported, detailed, true story of a 21st century America beyond the reach of authority.  It’s new, and true, and beautifully told -- Hayes is the young left’s most erudite and urgent interpreter.  Brilliant book.” – Rachel Maddow, host of The Rachel Maddow Show and author of Drift

“Here is the story of the ‘fail decade’ and how it made cynicism the inescapable flavor of our times. Along the way Chris Hayes delivers countless penetrating insights as well as passages of brilliant observation. If you want to understand the world you're living in, sooner or later you will have to read this book.”
– Thomas Frank, author of Pity the Billionaire

“Chris Hayes is a brilliant chronicler of the central crisis of our time – the failure of America's elites.  His humane, spirited reporting and analysis capture what millions of Americans already know in their gut – the emperor has no clothes. Yet this is not a book defined by despair or cynicism.  Hayes seizes this moment of crisis to offer important and unconventional ideas as to how to reconstruct and reinvent our politics and society.  Twilight of the Elites is a must read book for those, across the political spectrum, who believe there is still time to cure the structural ills of our body politic.” – Katrina vanden Heuvel, editor and publisher, The Nation

“In Twilight of the Elites, Hayes shows us what links the bailout of investment bankers but not mortgage holders, the useless public conversation in the run-up to the Iraq war, and the Catholic Church's harboring of child rapists: our core institutions are no longer self-correcting, and have become committed to protection of insiders at all costs.  Read this and prepare to be enraged.”
– Clay Shirky, author of Here Comes Everybody and Cognitive Surplus

"A provocation; a challenge; and a major contribution to the great debate over how the American dream can be restored." – David Frum, contributing editor, DailyBeast/Newsweek

“Chris Hayes is a gift to this republic.  The brilliance he shows us each week on MSNBC has now been complemented by this extraordinary book.  Beautifully written, and powerfully argued, it will force you to rethink everything you take for granted about ‘merit.’  And it will show us a way to a more perfect nation.”
– Lawrence Lessig, Roy L. Furman Professor of Law and Leadership, Harvard Law School and author of Republic, Lost

“Chris Hayes has given us the kind of book people don't write any more: a sweeping work of social criticism like Rachel Carson's Silent Spring and Michael Harrington's The Other America that take the failings of an entire society as their subject.  Those books brought grand movements of reform in their wake.  Would that history repeats itself with Twilight of the Elites—America ignores this prophet at their gravest peril.” – Rick Perlstein, author of Nixonland and Before the Storm