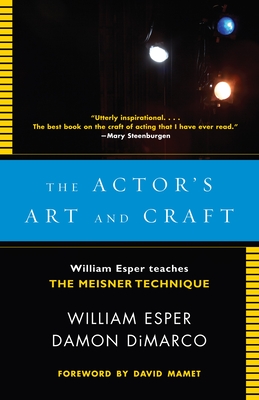 
Email or call for price
William Esper, one of the leading acting teachers of our time, explains and extends Sanford Meisner's legendary technique, offering a clear, concrete, step-by-step approach to becoming a truly creative actor.Esper worked closely with Meisner for seventeen years and has spent decades developing his famous program for actor's training. The result is a rigorous system of exercises that builds a solid foundation of acting skills from the ground up, and that is flexible enough to be applied to any challenge an actor faces, from soap operas to Shakespeare. Co-writer Damon DiMarco, a former student of Esper's, spent over a year observing his mentor teaching first-year acting students. In this book he recreates that experience for us, allowing us to see how the progression of exercises works in practice. The Actor's Art and Craft vividly demonstrates that good training does not constrain actors' instincts—it frees them to create characters with truthful and compelling inner lives.

William Esper was a graduate of Western Reserve University and the Neighborhood Playhouse School of Theatre in New York City. Bill trained as both actor and teacher under Sanford Meisner. Bill and Sandy worked closely together for 17 years, during which time Bill served as Associate Director of the Playhouses's Acting Department (1973-1976). Bill founded the William Esper Studio in 1965 and the Professional Actor Training Program at Rutgers University's Mason Gross School of the Arts in 1977. These two schools are renowned for routinely contributing actors of the highest quality to the International stage and screen. Bill died in 2019 at age 86.

Damon DiMarco earned his M.F.A. from the Rutgers University Mason Gross School of the Arts under Bill Esper's tutelage. He acts professionally on stage, screen, and TV, and teaches at Drew University. Damon's other books include, Tower Stories: an Oral History of 9/11; Heart of War: Soldiers' Voices from the Front Lines of Iraq; and My Two Chinas: The Memoir of a Chinese Counterrevolutionary with Baiqiao Tang, which features a foreword by His Holiness the Dalai Lama.

"Utterly inspirational. . . . The best book on the craft of acting that I have ever read." --Mary Steenburgen

"A veritable magnum opus on acting from a Master Teacher." --Olympia Dukakis

"Working with Bill Esper was an inspiring and unforgettable experience. . . . Every serious actor who dreams of becoming a first-rate artist must read this book!" --Calista Flockhart