The Forge of Christendom: The End of Days and the Epic Rise of the West (Paperback) 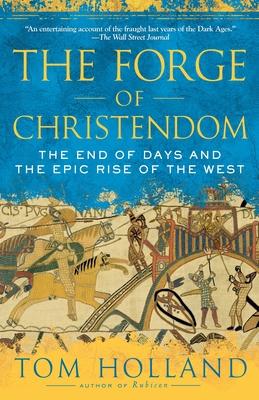 The Forge of Christendom: The End of Days and the Epic Rise of the West (Paperback)


Email or call for price
A grand narrative history of the re-emergence of Europe following the collapse of the Roman Empire. At the approach of the first millennium, the Christians of Europe did not seem likely candidates for future greatness. Weak, fractured, and hemmed in by hostile nations, they saw no future beyond the widely anticipated Second Coming of Christ. But when the world did not end, the peoples of Western Europe suddenly found themselves with no choice but to begin the heroic task of building a Jerusalem on earth.

In The Forge of Christendom, Tom Holland masterfully describes this remarkable new age, a time of caliphs and Viking sea kings, the spread of castles and the invention of knighthood. It was one of the most significant departure points in history: the emergence of Western Europe as a distinctive and expansionist power.
Tom Holland is a historian of the ancient world and a translator. His books include Rubicon: The Triumph and Tragedy of the Roman Republic, Persian Fire, In the Shadow of the Sword and The Forge of Christendom. He has adapted Homer, Herodotus, Thucydides and Virgil for the BBC. In 2007, he was the winner of the Classical Association prize, awarded to “the individual who has done most to promote the study of the language, literature and civilization of Ancient Greece and Rome.” He lives in London with his family.
Visit the author's website at www.tom-holland.org.

A Best Book of the Year: The Guardian, The Daily Telegraph, The Daily Mail, The Independent, The Evening Standard, The Spectator

“An entertaining account of the fraught last years of the Dark Ages.”
—The Wall Street Journal

“An enjoyable and exuberantly argued book. . . . Holland combines sound scholarly credentials with a gift for storytelling on a magisterial scale. . . . In a tightly woven and sometimes witty narrative, [Holland demonstrates] the subtle interplay of genuine religious sentiment and cynical power politics.”
—The Economist

“Prodigious. . . . A marvelous, enthralling read, [it] gives a lively sense of these turbulent centuries that were so crucial in the making of Western civilization. . . . Narrative history in the grand manner, written with the panache and confidence we associate with the great historians of the 18th and 19th centuries.”
—Daily Telegraph (London)

“Fresh from his triumphs in Rome and Persia, Tom Holland turns his brilliant narrative spotlight on the so-called ‘dark ages’ that followed the Western Empire’s decline. Global in reach, this book sweeps thrillingly over the troubled centuries that saw the triumph of Byzantium, the ascent of Islam—and the lingering disaster of the Crusades. . . . Unlike other blockbuster histories, this one takes as much care with beliefs as with the battles they provoked. We all live in the feverish aftermath of these events, which makes Holland’s galloping guidance all the more timely.”
—The Independent (London)

“A fast and lively lesson in that period which school so often misses out. . . . Another blockbuster.”
—The Sunday Times (London)

“A tremendously good read, which will no doubt gain more accolades and many more readers.”
—The Sunday Telegraph (London)

“As a stirring, vivid and formidably learned analysis of the events surrounding the Millennium, this will hardly be equalled. Extraordinary insights and lapidary phrases abound.”
—The Independent on Sunday (London)

“It is perfectly right for Holland to claim a great deal for the 11th century, of which his book is a splendid, highly coloured canvas.”
—The Guardian (London)

“Nobody believes in the Dark Ages any more, but Holland’s brightness and clarity makes this account of the year 1000 exceptionally pleasing.”
—The Scotsman

“This was the era when dragons were still thought to stalk the Earth; when daredevil noblemen would cover their bodies in honey and allow it to be licked off by ravening bears. . . . Mightily readable—far more than the stories of Greeks and Romans, this is your history.”
—Mail on Sunday (London)

“Remarkable. . . . Both a vastly entertaining read, with grandiloquent Gibbon-like sweep, as well as deeply intelligent: it constitutes a major contribution to some of the most crucial issues of our time.”
—John Cornwell, The Tablet

“An exhilarating sweep across European history either side of the year 1000; riveting.”
—The Spectator

“In the year 1000, Western Europe was no more than a primitive and fearful region in the shadow of Byzantium and Islam. Yet as Tom Holland demonstrates in this fascinating history it was also the crucible for the creation of the Europe we know today.  From the age of Canute and William the Conqueror, Pope Gregory VII and the Vikings this vivid and bloodthirsty history is a riveting insight into what made us the people we are.”
—The Daily Mail (London)