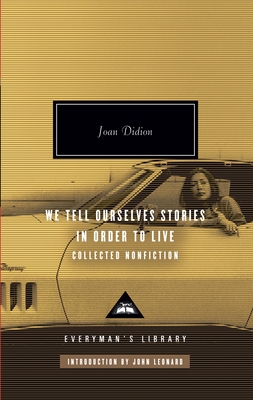 From the bestselling, award-winning author of The Year of Magical Thinking and Let Me Tell You What I Mean, this collection includes seven books in one volume: the full texts of Slouching Towards Bethlehem; The White Album; Salvador; Miami; After Henry; Political Fictions; and Where I Was From.

As featured in the Netflix documentary Joan Didion: The Center Will Not Hold.

Joan Didion’s incomparable and distinctive essays and journalism are admired for their acute, incisive observations and their spare, elegant style. Now the seven books of nonfiction that appeared between 1968 and 2003 have been brought together into one thrilling collection.

Slouching Towards Bethlehem captures the counterculture of the sixties, its mood and lifestyle, as symbolized by California, Joan Baez, Haight-Ashbury. The White Album covers the revolutionary politics and the “contemporary wasteland” of the late sixties and early seventies, in pieces on the Manson family, the Black Panthers, and Hollywood. Salvador is a riveting look at the social and political landscape of civil war. Miami exposes the secret role this largely Latin city played in the Cold War, from the Bay of Pigs through Watergate. In After Henry Didion reports on the Reagans, Patty Hearst, and the Central Park jogger case. The eight essays in Political Fictions–on censorship in the media, Gingrich, Clinton, Starr, and “compassionate conservatism,” among others–show us how we got to the political scene of today. And in Where I Was From Didion shows that California was never the land of the golden dream.

JOAN DIDION was born in Sacramento in 1934 and graduated from the University of California, Berkeley, in 1956. After graduation, Didion moved to New York and began working for Vogue, which led to her career as a journalist and writer. Didion published her first novel, Run River, in 1963. Didion’s other novels include A Book of Common Prayer (1977), Democracy (1984), and The Last Thing He Wanted (1996).

In 2005, Didion was awarded the American Academy of Arts & Letters Gold Medal in Criticism and Belles Letters. In 2007, she was awarded the National Book Foundation’s Medal for Distinguished Contribution to American Letters. A portion of National Book Foundation citation read: "An incisive observer of American politics and culture for more than forty-five years, Didion’s distinctive blend of spare, elegant prose and fierce intelligence has earned her books a place in the canon of American literature as well as the admiration of generations of writers and journalists.” In 2013, she was awarded a National Medal of Arts and Humanities by President Barack Obama, and the PEN Center USA’s Lifetime Achievement Award.

Didion said of her writing: "I write entirely to find out what I’m thinking, what I’m looking at, what I see and what it means.” She died in December 2021.
“[Didion’s is] one of the most recognizable—and brilliant—literary styles to emerge in America during the past four decades . . . [She is] a great American writer.”
—New York Times Book Review

“One beautiful sentence follows another . . . Didion has remained a clearheaded and original writer all her long life.”
—Newsweek

“Her intelligence is as honed as ever . . . Her vision is ice-water clear . . . Didion has captured the mood of America.”
—New York Times

“Many of us have tried, and failed, to master [Didion’s] gift for the single ordinary deflating word, the word that spins an otherwise flat sentence through five degrees of irony. But her sentences could only be hers.”
—Chicago Tribune

“I have been trying forever to figure out why [Didion’s] sentences are better than mine or yours . . . Something about [their] cadence. They come at you, if not from ambush, then in gnomic haikus, ice pick laser beams, or waves. Even the space on the page around these sentences is more interesting than it ought to be, as if to square a sandbox for a Sphinx.”
—from the Introduction by John Leonard