The Audacity of Hope: Thoughts on Reclaiming the American Dream (Paperback) 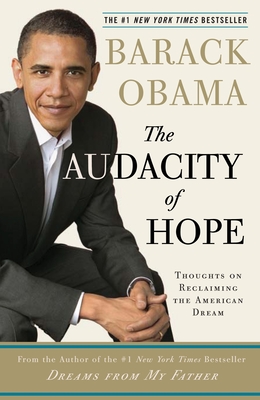 The Audacity of Hope: Thoughts on Reclaiming the American Dream (Paperback)


Usually Ships in 1-5 Days
#1 NEW YORK TIMES BESTSELLER • Barack Obama’s lucid vision of America’s place in the world and call for a new kind of politics that builds upon our shared understandings as Americans, based on his years in the Senate

“In our lowdown, dispiriting era, Obama’s talent for proposing humane, sensible solutions with uplifting, elegant prose does fill one with hope.”—Michael Kazin, The Washington Post

In July 2004, four years before his presidency, Barack Obama electrified the Democratic National Convention with an address that spoke to Americans across the political spectrum. One phrase in particular anchored itself in listeners’ minds, a reminder that for all the discord and struggle to be found in our history as a nation, we have always been guided by a dogged optimism in the future, or what Obama called “the audacity of hope.”

The Audacity of Hope is Barack Obama’s call for a different brand of politics—a politics for those weary of bitter partisanship and alienated by the “endless clash of armies” we see in congress and on the campaign trail; a politics rooted in the faith, inclusiveness, and nobility of spirit at the heart of “our improbable experiment in democracy.” He explores those forces—from the fear of losing to the perpetual need to raise money to the power of the media—that can stifle even the best-intentioned politician. He also writes, with surprising intimacy and self-deprecating humor, about settling in as a senator, seeking to balance the demands of public service and family life, and his own deepening religious commitment.

At the heart of this book is Barack Obama’s vision of how we can move beyond our divisions to tackle concrete problems. He examines the growing economic insecurity of American families, the racial and religious tensions within the body politic, and the transnational threats—from terrorism to pandemic—that gather beyond our shores. And he grapples with the role that faith plays in a democracy—where it is vital and where it must never intrude. Underlying his stories is a vigorous search for connection: the foundation for a radically hopeful political consensus.

Only by returning to the principles that gave birth to our Constitution, Obama says, can Americans repair a political process that is broken, and restore to working order a government that has fallen dangerously out of touch with millions of ordinary Americans. Those Americans are out there, he writes—“waiting for Republicans and Democrats to catch up with them.”
Barack Obama was the 44th president of the United States, elected in November 2008 and holding office for two terms. He is the recipient of the 2009 Nobel Peace Prize and the New York Times bestselling author of Dreams from My Father, The Audacity of Hope, and A Promised Land. He lives in Washington, D.C., with his wife, Michelle. They have two daughters, Malia and Sasha.

"He is one of the best writers to enter modern politics”—Jonathan Alter, Newsweek

"[Barack Obama] is that rare politician who can actually write—and write movingly and genuinely about himself. . . . In these pages he often speaks to the reader as if he were an old friend from back in the day, salting policy recommendations with colorful asides about the absurdities of political life. . . . [He] strives in these pages to ground his policy thinking in simple common sense . . . while articulating these venomous pre-election days, but also in these increasingly polarized and polarizing times."—Michiko Katutani, The New York Times

"[Few] on the partisan landscape can discuss the word 'hope' in a political context and be regarded as the least bit sincere. Obama is such a man, and he proves it by employing a fresh and buoyant vocabulary to scrub away some of the toxins from contemporary political debate. Those polling categories that presume to define the vast chasm between us do not, Obama reminds us, add up to the sum of our concerns or hint at where our hearts otherwise intersect . . . Obama advances ordinary words like 'empathy', 'humility', 'grace' and 'balance' into the extraordinary context of 2006's hyper-agitated partisan politics. The effect is not only refreshing but also hopeful. . . . As you might anticipate from a former civil lawyer and a university lecturer on constitutional law, Obama writes convincingly about race as well as the lofty place the Constitution holds in American life...He writes tenderly about family and knowingly about faith." —Los Angeles Times

"What's impressive about Obama is an intelligence that his new books diplays in aubundance." —Washington Post Book World

"An upbeat view of the country's potential and a political biography that concentrates on the senator's core values." —Chicago Tribune

“The self-portrait is appealing. It presents a man of relative youth yet maturity, a wise observer of the human condition, a figure who possesses perseverance and writing skills that have flashes of grandeur. Obama also demonstrates a wry sense of humor…His particular upbringing gives him special insights into the transition of American politics in the 1960s and ’70s from debates over economic principles to a focus on culture and morality, and into the divisiveness, polarization and incivility that accompanied this transition.”—Gary Hart, The New York Times Book Review

“America’s founders set a high standard for political writing, and most contemporary efforts fall woefully short. How nice, then, to have a politician who can write as well as U.S. Sen. Barack Obama of Illinois. … The Audacity of Hope … is fascinating in its revelation of Obama as someone who considers and questions, rather than asserts and declares. In nine focused chapters, Obama shows himself an agile thinker. This is an idea book, not a public-policy primer.”—Elizabeth Taylor, Philadelphia Daily News

“Not only is Obama a good writer, his mind is top-shelf, his heart tender.”—Les Payne, Newsday

“A thoughtful, careful analysis of what needs to be done to preserve our freedoms in a time of terror.”—Newton N. Minow, Chicago Tribune