Highways and Heartaches: How Ricky Skaggs, Marty Stuart, and Children of the New South Saved the Soul of Country Music (Hardcover) 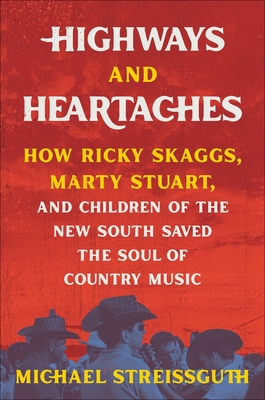 Highways and Heartaches: How Ricky Skaggs, Marty Stuart, and Children of the New South Saved the Soul of Country Music (Hardcover)


Coming Soon - Available for Pre-Order Now
In a dim clearing off a county road in Kentucky sits a sagging outdoor stage buried in moss and dead leaves.  It used to be the centerpiece of carnival-like Sunday afternoons where local guitarists, fiddlers and mandolin players hammered out old mountain ballads and legends from the dawn of country music performed their classic hits. Most of the musicians who showed up have long since passed, but Nashville stars Ricky Skaggs and Marty Stuart survive.  They were barely teenagers in the early 1970s when they visited this stage in the care of legends Ralph Stanley and Lester Flatt, respectively. Skaggs and Stuart followed their bosses to dozens of stages throughout Appalachia and deeper into the American southland.  They were the children, absorbing the wondrous music and strange dramas around them as they became innovators and living symbols of country music.

Highways and Heartaches takes readers on the rural circuit Skaggs and Stuart traveled, where an acoustic sound first assembled by masters such as Bill Monroe, Earl Scruggs, and Mother Maybelle Carter ruled the day. The young men were heirs to a bluegrass tradition transmitted to them early in life. One part mountain soul and another African American–influenced rhythm, the music they received was alternately celebrated and neglected in the more than fifty years after the two met in 1971, but since then it has never stopped evolving and influencing the wider American culture thanks to Skaggs and Stuart and other actors in this book, such as Jerry Douglas, Tony Rice, Keith Whitley, Emmylou Harris, and Linda Ronstadt. Riveting portraits of Johnny Cash, Ralph Stanley, Lester Flatt and other heartland-born figures emerge, too.

Molded by forces in postwar southern culture such as racial conflict, fringe politics, evangelicalism, growing federal government influence, and stubborn patterns of Appalachian living and thinking, Skaggs and Stuart injected the spirit of bluegrass into their hard-wrought experiments in mainstream country music later in life, fueling the profitability and credibility of the fabled genre. Skaggs’s new traditionalism of the 1980s, integrating mountain instruments with elements of contemporary country music, created a new sound for the masses and placed him in the vanguard of Nashville’s recording artists while Stuart embraced seminal influences and attitudes from the riches of American culture to produce a catalog of significant recordings.

Skaggs and Stuart’s friendship took years to jell, but their similar pathways reveal a shared dedication to the soul of country music and highlight the curious day-to-day experiences of two lads growing up on the demanding rural route in bluegrass culture. Their journeys—populated by grizzled mentors, fearsome undertows, and cultural upheaval—influenced their creativity and, ultimately, cut life-giving tributaries in the ungainly, eternal story of country music.
Highways and Heartaches is Michael Streissguth’s tenth book. Among the others are the critically acclaimed Johnny Cash: The Biography and Outlaw: Waylon, Willie, Kris and the Renegades of Nashville, which was named one of the top music books of 2013 by Rolling Stone.  He has written and directed three documentary films, including the award-winning Nighthawks on the Blue Highway and The Tower Road Bus and served as a program advisor on Ken Burns’ PBS documentary series Country Music (2019).  His writing has appeared in the Washington Post Magazine, Irish Times, Mojo, Bluegrass Unlimited, Living Blues, the Journal of Country Music, and other outlets, and he frequently contributes to rollingstone.com.  He is a professor in the Department of Communications and Film Studies at Le Moyne College in Syracuse, New York.