Treat It Gentle: An Autobiography (Paperback) 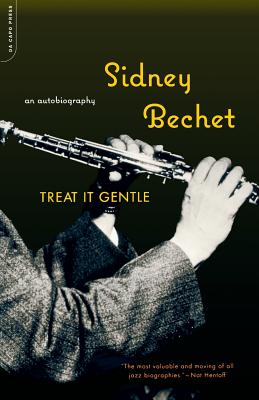 Treat It Gentle: An Autobiography (Paperback)

A legend on both the clarinet and the soprano saxophone, one of the most brilliant exponents of New Orleans jazz, Sidney Bechet (1897-1959) played with such fellow jazz legends as Louis Armstrong, Duke Ellington, Charlie Parker, and Jelly Roll Morton. Here is his vivid story written in his own words. Expressive, frank, and hilarious, this classic in jazz literature re-creates a man, a music, and an era.
Sidney Bechet (1897-1959) was one of the most brilliant exponents of New Orleans jazz. A prodigy on the clarinet, he soloed with Bunk Johnson's orchestra at age eleven, was improvising cornet-clarinet duos with Buddy Petit at age fifteen. Leaving New Orleans in the 1920s, Bechet took his Creole sound and spirit to New York, where he adopted the soprano saxophone and soon developed the unique style that marked his special artistry.