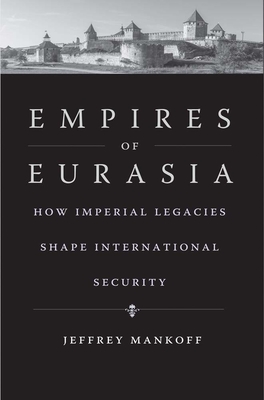 
Usually Ships in 1-5 Days
How the collapse of empires helps explain the efforts of China, Iran, Russia, and Turkey to challenge the international order

“This is a must read to understand the backstory of conflicts from Crimea to Xinjiang.”—Fiona Hill, author of There Is Nothing for You Here

Eurasia’s major powers—China, Iran, Russia, and Turkey—increasingly intervene across their borders while seeking to pull their smaller neighbors more firmly into their respective orbits. While analysts have focused on the role of leaders such as Vladimir Putin and Recep Tayyip Erdoğan in explaining this drive to dominate neighbors and pull away from the Western-dominated international system, they have paid less attention to the role of imperial legacies. Jeffrey Mankoff argues that what unites these contemporary Eurasian powers is their status as heirs to vast terrestrial empires, whose collapse left all four states deeply entangled with the lands and peoples along their peripheries but outside their formal borders. Today, they have all found new opportunities to project power within and beyond their borders in patterns shaped by their respective imperial pasts.
Jeffrey Mankoff is a Distinguished Research Fellow at the U.S. National Defense University’s Institute for National Strategic Studies, and the author of Russian Foreign Policy: The Return of Great Power Politics.

“Americans have a blind spot—they don’t study history.  Especially history of other countries and civilizations.  Mankoff digs into history to help us understand today’s complex geopolitics in Asia.  This is history most relevant for today.”—Dr. John J. Hamre, President and CEO, Center for Strategic and International Studies

“Empires of Eurasia contributes to a discerning, productive discussion of pressing contemporary challenges. Ambitious in scope and depth, this timely, highly readable book will be a foundational text for international relations, area studies and national security curricula for many years to come.”— Matthew Rojansky, Director of the Wilson Center's Kennan Institute


“In a narrative infused with historical depth and incisive analysis, Jeffrey Mankoff takes the reader through the geopolitics of a region we call Eurasia – still contested by Russia, Turkey, China, and Iran and burdened by old conflicts and contemporary convulsions of great power, imperial, competition. This is a must read to understand the backstory of conflicts from Crimea to Xinjiang.”—Fiona Hill, author of There Is Nothing for You Here