Murder and the Movies (Hardcover) 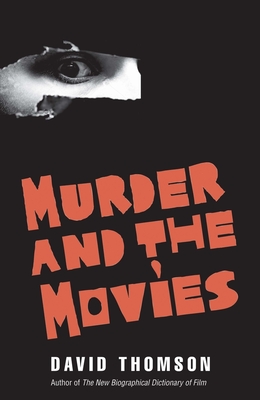 Murder and the Movies (Hardcover)


Email or call for price
A renowned movie critic on film’s treatment of one of mankind’s darkest behaviors: murder

"[Thomson's] analysis of death in Hitchcock movies is gorgeous. His restlessness is palpable. There is an anxiety in this brief, hurried book that suits these political and medical times."—Lisa Schwarzbaum, New York Times Book Review

How many acts of murder have each of us followed on a screen? What does that say about us? Do we remain law-abiding citizens who wouldn’t hurt a fly?  Film historian David Thomson, known for wit and subversiveness, leads us into this very delicate subject. While unpacking classics such as Seven,Kind Hearts and Coronets,Strangers on a Train,The Conformist,The Godfather, and The Shining, he offers a disconcerting sense of how the form of movies makes us accomplices in this sinister narrative process.

By turns seductive and astringent, very serious and suddenly hilarious, Murder and the Movies admits us into what Thomson calls “a warped triangle”: the creator working out a compelling death; the killer doing his and her best; and the entranced reader and spectator trying to cling to life and a proper sense of decency.
David Thomson is one of the great living authorities on movies, and is, most notably, the author of The New Biographical Dictionary of Film. He has written more than 20 books, including biographies of David O. Selznick and Orson Welles.

"[Thomson's] analysis of death in Hitchcock movies is gorgeous. His restlessness is palpable. There is an anxiety in this brief, hurried book that suits these political and medical times."—Lisa Schwarzbaum, New York Times Book Review

“It is a pleasure to follow David Thomson through a century's harvest of movies featuring what Raymond Chandler called the "simple art of murder," and other kinds of violent death. . . . He successfully throws revealing light on the ways that representations of that hideous crime have captivated and spellbound its movie audiences.”—Lars Ole Sauerberg, Criminal Law and Criminal Justice Book Reviews

“Thomson’s dive into dependency of movies on murder leads to a surprisingly quiet tone, a conversation of lowered voices: a sense of film enacting some fated, circular history.”—Greil Marcus

"Completely unpredictable, always surprising, always deeply engaging, and always very entertaining. You never know where Thomson may take you. You just know that wherever he does take you will be a wonderful place he will let you discover for yourself."—Richard Burt, University of Florida