Stalin's Library: A Dictator and his Books (Hardcover) 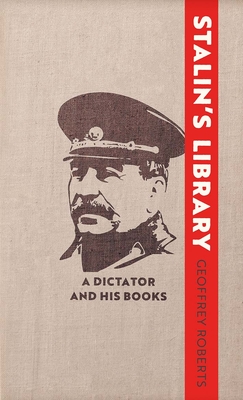 Stalin's Library: A Dictator and his Books (Hardcover)

In this engaging life of the twentieth century’s most self-consciously learned dictator, Geoffrey Roberts explores the books Stalin read, how he read them, and what they taught him. Stalin firmly believed in the transformative potential of words, and his voracious appetite for reading guided him throughout his years. A biography as well as an intellectual portrait, this book explores all aspects of Stalin’s tumultuous life and politics.

Stalin, an avid reader from an early age, amassed a surprisingly diverse personal collection of thousands of books, many of which he marked and annotated, revealing his intimate thoughts, feelings, and beliefs. Based on his wide-ranging research in Russian archives, Roberts tells the story of the creation, fragmentation, and resurrection of Stalin’s personal library. As a true believer in communist ideology, Stalin was a fanatical idealist who hated his enemies—the bourgeoisie, kulaks, capitalists, imperialists, reactionaries, counter-revolutionaries, traitors—but detested their ideas even more.
Geoffrey Roberts is emeritus professor of history at University College Cork and a member of the Royal Irish Academy. A leading Soviet history expert, his many books include an award-winning biography of Zhukov, Stalin’s general, and the acclaimed Stalin’s Wars: From World War to Cold War.

“Fascinating in parts. . . . Perhaps the biggest insight his book collection offers is that [Stalin] was a diligent, reverential and genuinely enthusiastic reader of works by Lenin.”—Amelia Gentleman, The Guardian

“Roberts has produced a relatively compact, engagingly written study of the Soviet leader as an intellectual. . . . Basing his interpretation both on what Stalin read and on how he did so, the author contends we can not only ‘get to know him from the outside in,’ but also ‘glimpse the world through his eyes.’ . . . . The world glimpsed through his eyes was a frightening place. It has become so again. Whether or not dictators of Stalin’s ilk will emerge once more, they are unlikely to be as well read.”—Lewis H. Siegelbaum, Times Literary Supplement

“Stalin’s Library is ‘among the best means we have of accessing the dictator’s inner life’ and Geoffrey Roberts does so admirably and revealingly here.”—Brian Maye, Irish Times

“Can one define a life from a personal library? Geoffrey Roberts, an expert on Russian dictator Joseph Stalin, thinks you can. Such analysis is particularly relevant as Stalin did not keep a diary nor write a memoir.”—Colin Steele, Canberra Times

“Roberts has taken a subject that, at first glance, would appeal only to Eurasian specialists and made it interesting for a broader audience.”—Robert Bolton, Mountain Statesman

“[A]ttention to rationality is what makes Roberts’s study of Stalin so relevant today, as the world seeks to understand the seemingly impenetrable actions of authoritarian rulers the world over, not least in Russia itself. Dismissing what we do not understand as madness, illness, egoism, or simple despotism, unfortunately, causes us to overlook possible rational explanations—both realist and ideological—for contemporary global politics.”—Luke Sayers, Jordan Center for the Advanced Study of Russia

“Stalin was a lifelong reader of astonishing stamina and range. In this shrewd and compelling exploration, Geoffrey Roberts finds the key to understanding the despot and his despotism hidden in plain sight in the pages of his books. The love of reading drew Stalin to the revolution and gave him the intellectual assurance that all his ruthless violence was both necessary and justified. Stalin’s Library offers a new and fascinating depth of insight into the mind of a fanatic.”—Rachel Polonsky, author of Molotov’s Magic Lantern

“Innovative and intriguing: the warlord and mass-murderer as bookworm, librarian and intellectual. A fascinating read.”—David Reynolds, coauthor of The Kremlin Letters: Stalin’s Wartime Correspondence with Churchill and Roosevelt

“A German philosopher once said, ‘Tell me how you read and I’ll tell you who you are.’ Geoffrey Roberts’s study of the remains of Stalin’s library, and the angry exclamations and demanding queries made by the tyrant's blue pencil in the margins (and sometimes whole rewritten pages) reveals Stalin as a fanatical proof-reader, a phenomenally gifted interrogator of other persons’ opinions.”—Donald Rayfield, author of Stalin and His Hangmen

“This fascinating, original, and meticulously researched study of Stalin’s library offers penetrating insight into the mind of a dictator who valued ideas as much as power. In exploring Stalin as an avid reader of books, Roberts punctures many myths about the man.”—Stephen Smith, author of Russia in Revolution