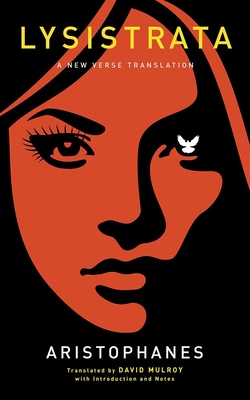 By Aristophanes, David Mulroy (Translated by)


Usually Ships in 1-5 Days
Aristophanes, a native Athenian and the leading exponent of Greek comedy, was born c. 450 BCE. Today forty-three of his plays are known by title; eleven survive. The most famous of these is the whimsical fantasy Lysistrata.

A perennial classroom and stage favorite as well as the basis of Spike Lee’s Chi-Raq, the play is as relevant today as it was 2,500 years ago. The premise is simplicity itself: to end the Peloponnesian War, women decide to withhold sex from their husbands until the fighting stops.

The play is by turns raucous, bawdy, frantic, and funny. David Mulroy’s exciting new translation retains the original’s verse format, racy jokes, and vibrancy—setting it apart from previous efforts, which are typically reproduced as prose or depart from meaning and meter. His introduction offers a concise summary of Aristophanes’ life and social milieu, including a brief overview of the Peloponnesian War, which took place during the playwright’s lifetime. The appendices include guides on translating meter and Greek pronunciation for aspiring thespians.
David Mulroy is a professor emeritus of classics at the University of Wisconsin–Milwaukee. An accomplished and lauded translator of Greek drama, he has published English editions of The Complete Poetry of Catullus, Sophocles’ Theban trilogy—Oedipus Rex, Antigone, and Oedipus at Colonus— and the three plays that make up The Oresteia by Aeschylus—Agamemnon, Libation Bearers, and The Holy Goddesses.

“Mulroy has produced a clear, accessible, poetic version and as such offers a good alternative to current prose translations and freer verse translations.”—Robert Littman, translator of The Theban Plays

“[Agamemnon] could well become the standard text for students of classics in English, as pre-reading for those attempting the difficult Greek, and possibly as an acting version. . . . It is the best this reviewer has come across.”—Classics for All

“The sheer elegance and beauty of Mulroy’s verses [of Agamemnon] deserve the highest praise.”—Ex Class

“A great work of world literature has at last become a great poem in English. Mulroy’s translation [of Oedipus Rex] is far superior to other available English verse translations.”—Robert J. Rabel